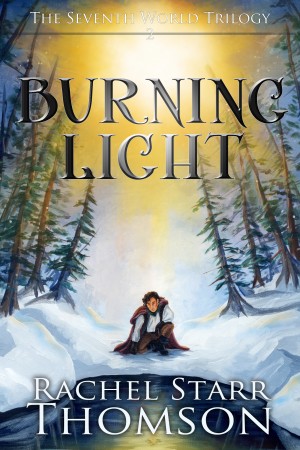 By Rachel Starr
Rated 4.50/5 based on 2 reviews
After five hundred years of oppression, the Seventh World is beginning to wake to the realities of the unseen world behind the Veil. The rise of the Gifted heralds the return of the King of ancient days—but evil is also waking. Aware that their control is beginning to slip, the Order of the Spider sets out to convert the Gifted or destroy them. More
When they see beyond the sky
When they know beyond the mind
When they hear the song of the Burning Light:
Take these Gifts of My Outstretched Hand,
Weave them together.
I shall come.

After five hundred years of oppression, the Seventh World is beginning to wake to the realities of the unseen world behind the Veil. The rise of the Gifted heralds the return of the King of ancient days—but evil is also waking. Aware that their control is beginning to slip, the Order of the Spider sets out to convert the Gifted or destroy them.

Among those caught in the conflict are Nicolas Fisher, a young Gypsy running from the past, and Maggie Sheffield, driven underground in the city of Pravik. Others also stand against the Blackness: the young chieftain Michael O’Roarke, the mysterious healer called Miracle, and the indomitable rebels of Pravik.

As the world takes sides, their lives will play an integral role—in the coming of light, or the triumph of darkness.

Burning Light is the second book in The Seventh World Trilogy.

Rachel Starr Thomson is in love with Jesus and convinced the gospel will change the world.

Rachel is a woman of many talents and even more interests: she’s a writer, editor, indie publisher, singer, speaker, Bible study teacher, and world traveler. The author of the Seventh World Trilogy, The Oneness Cycle, and many other books, she also tours North America and other parts of the world as a speaker and spoken-word artist with 1:11 Ministries.

Adventures in the Kingdom launched in 2015 as a way to bring together Rachel’s explorations, in fiction and nonfiction, of what it means to live all of life in the kingdom of God.

Rachel lives in the beautiful Niagara Region of southern Ontario, just down the river from the Falls. She drinks far too much coffee and tea, daydreams of visiting Florida all winter, and hikes the Bruce Trail when she gets a few minutes. A homeschool graduate from a highly creative and entrepreneurial family, she believes we’d all be much better off if we pitched our television sets out the nearest window.

LIFE AND WORK (BRIEFLY)
Rachel began writing on scrap paper sometime around grade 1. Her stories revolved around jungle animals and sometimes pirates (they were actual rats . . . she doesn’t remember if the pun was intended). Back then she also illustrated her own work, a habit she left behind with the scrap paper.

Rachel’s first novel, a humorous romp called Theodore Pharris Saves the Universe, was written when she was 13, followed within a year by the more serious adventure story Reap the Whirlwind. Around that time, she had a life-changing encounter with God.

The next several years were spent getting to know God, developing a new love for the Scriptures, and discovering a passion for ministry through working with a local ministry with international reach, Sommer Haven Ranch International. Although Rachel was raised in a strong Christian home, where discipleship was as much a part of homeschooling as academics, these years were pivotal in making her faith her own.

At age 17, Rachel started writing again, this time penning the essays that became Letters to a Samuel Generation and Heart to Heart: Meeting With God in the Lord’s Prayer.

In 2001, Rachel returned to fiction, writing what would become her bestselling novel and then a bestselling series–Worlds Unseen, book 1 of The Seventh World Trilogy.

A classic fantasy adventure marked by Rachel’s lyrical style, Worlds Unseen encapsulates much of what makes Rachel’s writing unique: fantasy settings with one foot in the real world; adventure stories that explore depths of spiritual truth; and a knack for opening readers’ eyes anew to the beauty of their own world–and of themselves.

In 2003, Rachel began freelance editing, a side job that soon blossomed into a full-time career. Four years later, in 2007, she co-founded Soli Deo Gloria Ballet with Carolyn Currey, an arts ministry that in 2015 would be renamed as 1:11 Ministries. To a team of dancers and singers, Rachel brought the power of words, writing and delivering original narrations, spoken-word poetry, and songs for over a dozen productions. The team has ministered coast-to-coast in Canada as well as in the United States and internationally.

Rachel began publishing her own work under the auspices of Little Dozen Press in 2007, but it was in 2011, with the e-book revolution in full swing, that writing became a true priority again. Since that time Rachel has published many of her older never-published titles and written two new fiction series, The Oneness Cycle and The Prophet Trilogy.

Over 30 of Rachel’s novels, short stories, and nonfiction works are now available in digital editions. Many are available in paperback as well, with more released regularly.

The God she fell in love with as a teenager has remained the focus of Rachel’s life, work, and speaking.

After reading "Worlds Unseen", I knew I should continue the series. One of the marks of a good book (for me) is a good sense of what each character wants and, in the long run, how each character shapes the story.
I highly recommend reading all of this series. Ms Thomson does write in a religious "theme" but there were no distraction caused by that - this was not a sermon.
Enjoy this book and the others very much.

This sequel to the fantasy novel Worlds Unseen in the Seventh World trilogy is exciting and well made. Clearly high fantasy with its mythology, supernatural forces, spiritual helpers and hidden "gifts", but set in world similar to our own late 18th-century Europe.

Different groups of endangered gypsies, poor farmers and pale underground dwellers prepare to fight against strong villains who want to release the Darkness through a veil made thousands of years ago. The Gifted, young people who see what can't be seen, hear what can't be heard and can sing the sacred Songs, are crucial to the fight. They all have to take a stand, so the King can come back into the world and make everything right.

A really good read, with loveable (and hateable) characters, thrill and magic. I look forward to the last book.

You have subscribed to alerts for Rachel Starr.

You have been added to Rachel Starr's favorite list.

You can also sign-up to receive email notifications whenever Rachel Starr releases a new book.