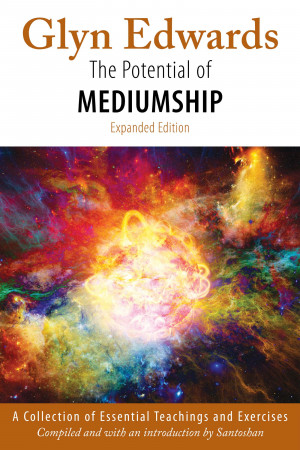 The Potential of Mediumship: A Collection of Essential Teachings and Exercises (expanded edition)

By Glyn Edwards
An inspiring anthology of wisdom by one of the UK’s finest mediums and teachers, Glyn Edwards, in which he shared numerous experiences, insights and exercises for unfolding mediumistic and spiritual potential. There are chapters here for everyone, for beginners and the more advanced. This is a rare and enriching treasure trove of teachings and practices for awakening to the spirit world. More
'The Potential of Mediumship' presents an inspiring collection of teachings, along with numerous essential exercises for unfolding mediumistic and spiritual gifts.

Glyn Edwards worked as a medium for over 40 years and was internationally regarded as one of the finest mediums and teachers of psychic and spiritual science in the UK. In this first ever anthology of his wisdom, he shared first-hand accounts about his own mediumistic experiences and imparted profound insights that will help you to move forward with your abilities.

There are chapters here for everyone, for beginners and the more advanced, that reveal how the spirit world can communicate with and work through you and prove survival of life after death. All in all, this is a rare and enriching treasure trove of mediumistic and spiritual knowledge with crucial practices for awakening to the spirit.

This expanded edition includes an extensive biography about Glyn and two additional articles by him.

REVIEWS AND ENDORSEMENTS:
“There should be many more books like this!”
– Psychic News.

“I knew and worked with Glyn Edwards for many years and through his continuing teachings and encouragement my belief in myself and my work was renewed and constantly refreshed. I believe that what he had to share is of vital importance to all those wanting to unfold the abilities within them.”
– Mark Stone, Mind-Body-Spirit, Westbourne.

ABOUT THE COMPILER/EDITOR:
Stephen Wollaston was given the name Santoshan by an English swami and was a close friend of Glyn Edwards for 26 years. He has served a trustee of the UK charity GreenSpirit for over tens years, is the designer of GreenSpirit magazine, and an author, coauthor and editor of more than twelve books, including ‘Spirituality Unveiled: Awakening to Creative Life’ (new eBook edition released in 2020), and ‘Rivers of Green Wisdom: Exploring Christian and Yogic Earth Centred Spirituality’ (GreenSpirit eBook edition released in 2014). In 2020 he was ordained as a OneSpirit Interfaith Foundation minister.

Glyn Edwards was internationally recognised as one of the UK’s greatest mediums and teachers of spiritual and psychic science. At sixteen he joined a Benedictine community. He later became a protégée of the world-renowned medium Gordon M Higginson and founded the Gordon Higginson Fellowship. He was a certificate holder of the Spiritualists’ National Union, was a regular and highly popular course tutor at the esteemed Arthur Findlay College in England for over three decades, and ran workshops and demonstrated his mediumship throughout the UK and worldwide. He co-authored two popular development books with close-friend and writer Santoshan (Stephen Wollaston), was featured in other books, wrote various articles for publications such as Two Worlds magazine and Psychic News, and released various audio recordings of his teachings. He was particularly known for the quality and depth of his teaching and his ability to demonstrate his mediumship almost effortlessly in front of large audiences.

Glyn's books include the anthology of his wisdom, 'The Potential of Mediumship: A Collection of Essential Teachings and Exercises' (first released in 2012/expanded edition 2017 - available in paperback, and as an eBook on Smashwords); 'The Spirit World in Plain English: Mediumistic and Spiritual Unfoldment' (2011 revised edition of 'Tune in to Your Spiritual Potential', first released in 1999); and 'Spirit Gems: Essential Guidance for Spiritual, Mediumistic and Creative Unfoldment' (2011 revised and expanded edition of '21 Steps to Reach Your Spirit', first released in 2001 in the UK, and as 'Unleash Your Spiritual Power and Grow' in 2007 for the US market). The book 'Realms of Wondrous Gifts: Psychic, Mediumistic and Miraculous Gifts in the Great Mystical and Wisdom Traditions' features two in-depth conversations with Glyn, and is available as a free Smashwords eBook.

You have subscribed to alerts for Glyn Edwards.

You have been added to Glyn Edwards's favorite list.

You can also sign-up to receive email notifications whenever Glyn Edwards releases a new book.