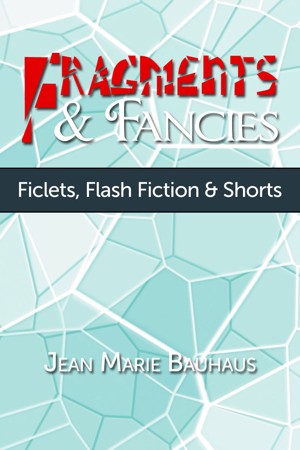 By Jean Marie Bauhaus
Rated 5.00/5 based on 1 reviews
Angels, vampires, ghosts and faeries mingle with the lovelorn, the desperate, the weary and the brave in this collection of quick-fire stories from Restless Spirits author Jean Marie Bauhaus. More
Three vampires walk into a bar...

A suicidal widower is talked down by a mysterious, chain-smoking stranger with an ulterior motive...

A picturesque sea-side chalet harbors a disturbing secret under its serene waters...

A kindly grandmother runs a pie shop that is a gateway to time and space...

A mysterious house with a dark reputation tempts one bored little girl...

Angels, vampires, ghosts and faeries mingle with the lovelorn, the desperate, the weary and the brave in this collection of quick-fire stories from Restless Spirits author Jean Marie Bauhaus.

Jean Marie Bauhaus is a traditionally-published and indie author of five novels and counting, as well as a number of novellas and short stories. She also writes freelance articles about dogs for a living.

Born and raised in Oklahoma, she currently makes her home in the middle of the woods deep in the Ozark mountains with her own dog, a fierce and mighty Chihuahua named Pete, her husband of 13 years, and a gaggle of other four-legged dependents. When she’s not writing about ghosts, zombies, vampires and other things that go bump in the night, she can usually be found hiking the side of the mountain or trading her keyboard for knitting needles and curling up with a mug of tea and a horror podcast.

Or at the microwave, re-heating her tea because she forgot to drink it before it got cold. #writerproblems

Jean has a Bachelor of Science in Social Science, Psych/Soc emphasis, which means she’s smart enough to finish college but not smart enough to choose a major that’s actually useful. But it comes in handy for building psychological character profiles and developing post-apocalyptic societies.

Easily spooked by ghost stories as a child, teen Jean faced her fears by forcing herself to watch horror movies and read Stephen King until she fell in love with the genre. As a grown-up (more or less, depending on who you ask), her tastes expanded to include a broader range of speculative fiction and romance, but she keeps coming back to the supernatural and paranormal. She has a strong affection for all things zombie-related, which is a good thing considering she’s currently writing a trilogy in that genre. Watch for Desolation of the Damned, the third book in her Walking Dead/ True Blood mashup Trilogy of the Damned, to come out in the summer of 2020.

I really love the stories...but the ending was kinda abruptly done that it left me (badly) wanting for more!

You have subscribed to alerts for Jean Marie Bauhaus.

You have been added to Jean Marie Bauhaus's favorite list.

You can also sign-up to receive email notifications whenever Jean Marie Bauhaus releases a new book.