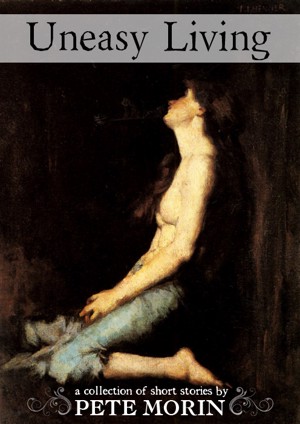 By Pete Morin
Rated 5.00/5 based on 7 reviews
A collection of short stories involving abandonment, grief, loss, and betrayal More
A man who abandoned his family is visited by his daughter in an island paradise soon before he will die.

A college co-ed is victimized by beauty.

A man grieving the loss of his father tends to his ailing ex-wife, with the help of his girlfriend.

A lawyer and her detective lover get away with murder.

In my adult life, I’ve been a trial attorney, a politician, a bureaucrat, a lobbyist, and (I like to think) an observant witness to human behavior. I’ve tried to combine all of them in my debut novel, Diary of a Small Fish.

My creative writing began at the University of Vermont in the mid-1970’s, where I was very fortunate to have studied under award winning authors David Huddle and T. Alan Broughton. Following college, I pursued a wide-ranging career in law and politics in which I served three terms in the Massachusetts Legislature and two years as general counsel of the MBTA. In what some friends peg a mid-life crisis, I returned to writing fiction in 2007.I now split my time between fiction and law.
My short fiction has appeared in NEEDLE, A Magazine of Noir, Words With Jam, 100 Stories for Haiti, and Words to Music. I republished many of them in a collection titled Uneasy Living.

When I’m not writing crime fiction or practicing law, I play blues guitar in Boston bars, enjoy food and wine with my wife of 28 years, Elizabeth, and our two adult children. On increasingly rare occasions, I play a round of golf. We live in a money pit on the seacoast south of Boston, in an area once known as the Irish Riviera.

I am very lucky to be represented by Christine Witthohn of Book Cents Literary Agency.

Within these few stories of various length, tone, texture, and ideas, the author has shown us grief, and joy, and love, and pain, and loss. But most importantly, heart. For that is what makes a story, and we have that in abundance. Well done@

I didn't want to read "Uneasy Living." After all, I'm quite busy. It felt like a burden. A gift of my precious time to another writer. Maybe tomorrow. And how good could it be for only $.99 anyway. I think you know where this is going. Shame on me. I was moved by these stories, and still am... in my stomach, in my breathing, by the burn in my face as tears hide behind my facade. $.99! What a joke. For value received... an immeasurable bargain. Buy it. Read it. I guarantee you won't regret it. If you do, I'll reimburse you.

(reviewed the day of purchase)
Rebecca Lochlann reviewed on Aug. 4, 2011

I laughed. I cried. Mostly I cried. Which was a problem because it seemed like many times I was off to work and my mascara ran. I probably should invest in waterproof mascara.

Each of these stories evokes empathy, emotion, and identification. There is much humanity in this short volume; I suspect that for me, memories of these characters will linger forever.

Case in point: I read "Celestial" in another venue a few years before this book was published. I have never forgotten that story. We are not told the details, but it doesn't matter. The story ends, giving us perfect and shocking understanding, insight into how the actions of parents can affect their children for a long, long time, and in unexpected ways. My feeling is that the main character was simply biding his time, waiting for that perfect scenario. When it came, he did not hesitate to act. It felt like he'd had it planned for years, and was simply waiting for the last cog to slip into place.

The story that resonated most with me was "The Messenger." I will read this one again and again, no doubt, for the rest of my life. That many of my own personal convictions, convictions that took years to build, were revealed here by an author I have never met, was startling. Yet at the same time, it cements my long-held belief that we are mostly the same underneath our individual surfaces.

In "Joyful, Joyful," the author captures something rare and not well understood. The transcendence that women, for time immemorial, achieve.

This small volume of stories was constructed with loving care, and it shows. I will buy more of the author's work with pleasure. Easy to give it five stars.

It’s Morin's kindness that paints his stories with detail. My full review is here: http://theopenend.com/2011/07/30/uneasy-living-by-pete-morin/

(reviewed 22 days after purchase)
Kevin Montgomery reviewed on July 29, 2011
(no rating)
I like how Mr. Morin varies his writing style according to the point he wants to convey. The first story is almost all dialogue, abrupt, short sentences, and non-sentences, with very little explanation, and everything is told through the personality of the person’s grammar, ending with, “Don’t do that to me again, OKAY?” It’s a good ending, letting us know that everything will be OK with this father and daughter.

The second story is a completely different style. It’s more eloquent, smoother, and more literary, with expressions like, “she wrapped me like a blintz,” and “my eyelids were like anvils,” and “a noose that was, thankfully, empty.” It’s a pleasant read.

And it ends happily. The stars in the sky support the story throughout, with their clarity and brilliance, which, in my opinion, conveys the idea of permanence.

A Dirty Angel goes back to the choppy style, but works well in this situation. It’s a little like stream-of-consciousness, with the author talking to the reader, as in “I pity your lack of imagination.” It’s very hard to do second-person narrative, but Mr. Morin pulls it off quite well,

“…like she’d been twiddling a lacrosse stick since birth” twiddling is a good word.

Surprise ending, she was using him. Sorry to divulge.

Joyful, Joyful is my favorite. It conveys a tone of quiet acceptance of life’s circumstances, but at the same time, reveals the goodness of people whom you wouldn’t expect it to come from. It’s easy to bond with the main characters, given Mr. Morin’s strict adherence to point of view. It’s sad and funny at the same time, mostly sad, but very satisfying.

That’s sad and funny at the same time, mostly sad.

Private Trust, hmmm that’s a thinker. Although clever and short, it’s not one you want to read in bed, curled up with a hot cup of tea, droopy-eyed, ready for lights out, thinking, “Ah, this one is short. I’ll just take a look at it and go to sleep.”

No, you need a couple of stiff drinks to lubricate the intellect, and plenty of time to read it two or three times. It’s great in that regard.

The last story is a shift to present tense, so you have to wrap your brain around it if you’re coming off the couple of drinks from the last one. It’s very philosophical, about a dying mother who forgives her ex-husband’s (dead now) infidelities, telling them to her son with a calm acquiescence. She’s happy, even eager, to go “up there.” Why?

Why? I suspect she’s got a plan, well, not a plan, but an objective.

The messenger, her son, says, “He should know that none of us ever felt his absence”

She declares, “I’ll make sure to pass that along,” and you can almost hear her thinking, “Yeah, sure. Wait ‘till I get up there and tell him how he screwed you up, too.”

Anyway, that’s my take on it. “Honey, can you get me another beer?”

Egregiously underpriced! This is an exquisite collection of short stories. Morin's characters are superb. "Joyful, Joyful" is a poignant tale of loss that is both vivid and profound. "A Dirty Angel" is a clever tale of stolen equinimity. I recommend that you buy it and read it today.

Morin, a long time colleague, manages to capture the taste of loss with a classic signature of fine wordsmanship and acute imagery. When I first read Peter's 'A Dirty Angel' in January, I knew that Peter could only be an older, more intelligent and professional version of myself. Now having gotten a full taste of the breadth of his work, I continue to sympathize. His approach to rhetoric tows the line between hyper intellectual and perfectly organic.

This collection is a harmonious representation of the bittersweet taste of lament and sorrow. His accounts cut to the heart with relatable experiences while maintaining critical nuances all his own. 'Joyful Joyful' had me drawing upon my own limited experiences with death while offering new and thought provoking elements to such experiences.

Overall this work goes to show that when put in the proper context and delivered with such verbal mastery, even the most tragic moments can seem beautiful and even humorous. Peter continues to be an inspiration through is dedication to his work and his consummate approach to perfecting his art. I recommend this collection to anyone who possesses and appreciation for heartache and wonderment.

Pete Morin is a true talent in the short story genre. It is rare to see someone move so fluently between moods and ambiences, creating believable worlds in few words and letting the story proceed at its own pace.

In this compilation I especially liked "Celestial", which is a story verging on speculative fiction. Pete brings to life the main character effortlessly and believably, and the piece leaves the reader with a sense of wonder.

Another favorite is "Joyful, Joyful", which rang so very true with me, due to my own experience after my father passed away. I marveled at the depth of Pete's perception and the frankness of his thoughts. In this piece his insights really shine, and one cannot read this short story without being moved.

"A Dirty Angel" shows Pete's flawless handling of sequencing, a thing which has always been is forte, especially in his book "Diary of a Small Fish". I am eagerly awaiting more in this line of short stories, action-packed but fun.

In all, I'd say any serious fan of short stories has to read these stories; it will leave him with a sense of contentment.

Effortless world building in short stories is difficult to execute, and is done incredibly well here. Backstory and character building are often two things missing in short fiction, making it hard (if not impossible) to relate to the characters.

No such issues with the stories inside UNEASY LIVING. The reader is pulled inside each short story and deposited on the other side still mesmerized, and wondering how such a strong effect was accomplished in so few words.

You have subscribed to alerts for Pete Morin.

You have been added to Pete Morin's favorite list.

You can also sign-up to receive email notifications whenever Pete Morin releases a new book.