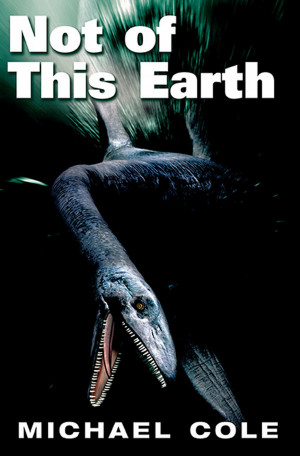 Not of This Earth

By Michael Cole
A professor of archeology sets out on a mission to identify an ancient Mesoamerican ruin and a mysterious anomaly that lies beneath it. The workers she hires to excavate the ruin flee, claiming there are malevolent forces at work. She and her team disregard the warning and continue to explore. What starts out as an archeological dig turns into a maelstrom of death and destruction. More
Alexis Brooke, an expert at identifying Mesoamerican structures, is called upon to head up an expedition to the Yucatan Peninsula to investigate a half-buried Mayan ruin and a metallic anomaly that purportedly lies beneath it.

With the help of three other scientists, she soon discovers that not only is the ruin hollow, but that it also emits strange sounds, sounds that can only be heard at night. When a member of her team discovers a way to open it, she lowers herself into the ancient structure.

As a young boy, I was fascinated with the unknown, the mysterious, and also the unworldly. Ever since I can remember, I enjoyed reading books about archeology. To be the first to enter a crypt, or a tomb that no one had set foot in for three thousand years held a fascination for me. I always wondered what it would be like to encounter an intelligent being from another world. What secrets could he tell? What mysteries could he solve? Such is my imagination, such is my passion.

Since I've never had an opportunity to experience any of those things, I dreamt a lot. The most logical step was to write, but that took years in the making. I soon discovered that in order to hold a reader's interest, a book had to be more than just a good story. Finally, I managed to write on my own.

To date, all thirteen of my novels contain quest plots. My characters are always searching for "something." They also manage to get themselves into a lot of trouble before they find what they're looking for. What they find isn't nearly as important as the change that occurs within them during the quest.

My grandparents were Russian. During the Bolshevik Revolution they fled to China, where my mother was born. I came to America from France at the age of twelve and immediately traded in my French-version of Lederhosen for a pair of jeans. After earning B.A. and M.A. degrees, I wore a number of different career hats, but none of them ever stirred my soul—until I took up writing.

Reviews of Not of This Earth by Michael Cole

You have subscribed to Smashwords Alerts new release notifications for Michael Cole.

You have been added to Michael Cole's favorite list.

You can also sign-up to receive email notifications whenever Michael Cole releases a new book.