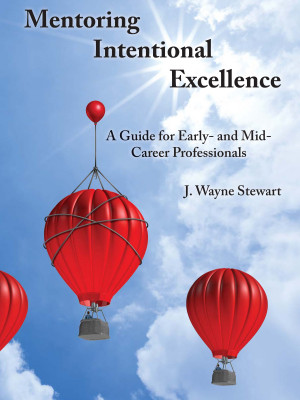 Mentoring Intentional Excellence: A Guide for Early- and Mid-Career Professionals

By J. Wayne Stewart
Career guidance and advice by the author who worked in corporate America for over 40 years. More
Do you wish you had a mentor to help you make decisions in your career? Someone who didn’t lecture you, but told you stories—often funny—that illustrate a key point, drawn from the deep knowledge of 40 years working in U.S. and international business? Mentoring Intentional Excellence is that rare resource that allows you to get right to the material you want, get the advice you need, and maybe even make you think.

“You’re blessed to be holding Mentoring Intentional Excellence, a career’s worth of stories, lessons, and tough questions from a senior executive with a proven track record of results, guided by a foundation of values.” ~Shon Anderson, CEO B9Creations, from the foreword

“A must-read for professionals and executives. Provided in a straightforward and transparent way, Wayne’s forty years of experience are condensed into a book mentoring advice for the up-and-coming in any industry.”~Jim Stewart, Founder/CEO ES Interims, Founder/Partner Opus Faveo

“The value of Mentoring Intentional Excellence is enhanced by the breadth of Wayne’s wide experience in large companies, being an entrepreneur, his community leadership, and church involvement. Read and learn from one of the best.” ~Dave Turner, former President, CEO and BOD Chairman, Neuro Resource Group, Inc.

J. Wayne Stewart is a native Texan, and a graduate of the University of Texas. He married Dottie Coke in 1973, the same year he began his professional career at Texas Instruments. After twenty-one years at TI, rising through the ranks leading large Defense Operations, he moved on to Operations Executive positions with FSI International and ADC Telecommunications. Following the Telecom meltdown of 2001, he went out on his own, opening consulting, restaurant franchising, and ranching businesses. One of the consulting assignments resulted in being invited back into the corporate world where he finished his career at Schneider Electric.

After retiring in 2013, Wayne took up writing and ranching full-time, and he recently opened a publishing business to handle publication and distribution of his books, Yesteryear, The Next Generation and Mentoring Intentional Excellence. Two more books are in the works, Passing The Torch, a faith-based book on the transition of generations, and Generations of Texas, a history of eight generations of Texans, from the Texas Revolution through multiple wars and into the twenty-first century. His website also offers his father’s Yesteryear, a compilation of Jeff Stewart’s popular newspaper columns about a way of life that no longer exists. West Texas in the Depression, Pearl Harbor and WWII, and the executive world of the 1900s, these are all part of Jeff’s documentation of his world in Texas.

You have subscribed to alerts for J. Wayne Stewart.

You have been added to J. Wayne Stewart's favorite list.

You can also sign-up to receive email notifications whenever J. Wayne Stewart releases a new book.