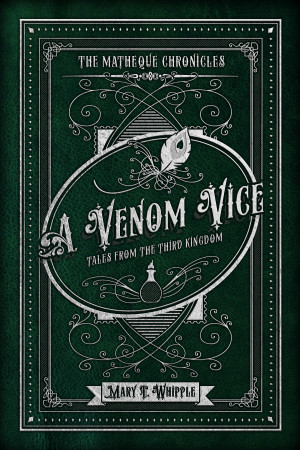 By Mary Whipple
The amusing tragedy of a princess more adept at crafting corrosive, explosive potions than she is at basic human interaction and the jester who falls in love with her. More
Princess Bellardia Andryala Pimpernel is actually much more skilled at crafting highly combustible potions than she is at basic human interaction. This is unsurprising as her father's obsession with finding one of the Four True Heirs of Matheque led him to banishing all the nobility and gentry from the castle (save for on special occasions every now and then, of course). Thus, our princess grew up in a nearly empty castle (aside from all the maidservants, menservants, cooks, gardeners, guards, tutors, the councilors, her Lady-in-Waiting, and the court soothsayer/alchemist/doctor, Merdwick. So, practically deserted).
She was quite used to being ignored until on her eighth birthday she is given the gift of her very own jester. This boy, Jack, proves to be her very dearest friend despite a past he won't discuss and his predisposition to causing chaos. Aside from crafting the occasional small explosive to clear her head, Jack is her only anchor to sanity when seven years later she comes of age. Now that she’s a woman grown (at a very mature fifteen years of age), she’s thrust into a world of arranged marriage, cloying nobility with suspect machinations, whispers of regicide, and darker parts of her family history that she would really prefer not to think about.
But of course, she’s not in love with Jack. Oh, no. That would be ridiculous. He's a jester. His tousled black hair, emerald green eyes, and taut, agile build never enter into her thoughts in the slightest.

Mary T. Whipple is predominantly a writer of traditional fantasy (because what story could not be improved by the introduction of dragons?) but also has a penchant for pirates, tragic romance, Victorian England, and Greek mythology. She has a deep love for fracturing fairy tales and an unreasonable amount of disdain for the Knight in Shining Armor and Prince Charming archetypes.
At the age of four she wrote her first story about a family of squirrels (spelling things more or less phonetically). The “novel” she wrote the following year (after attaining a greater understanding of the alphabet) was the story of an incomprehensibly beautiful witch (incidentally also named Mary) who went on a grand quest for no other reason than she felt like it and rescued baby sea monsters and dragons all along the way. Ms. Whipple has continued writing ever since and is proud to say that she now has a very firm grasp of the alphabet.
When not reading or writing, Ms. Whipple can often be found playing video games with her husband while their puppy, kitten, and bearded dragon look on dolefully and wonder why they are not currently being given treats and tummy scritches.

You have subscribed to alerts for Mary Whipple.

You have been added to Mary Whipple's favorite list.

You can also sign-up to receive email notifications whenever Mary Whipple releases a new book.