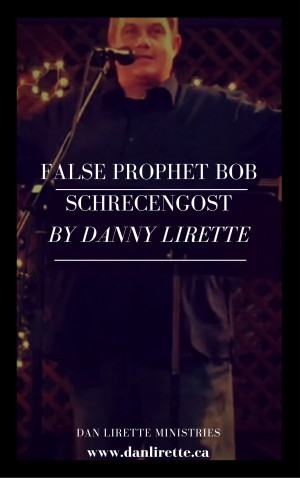 By Danny Lirette
As false prophet Bob Schrecengost took the stage, he began to speak. His preaching was more of a comedy show than a message sent by God. Over and over and over again he'd make jokes; some of which were funny yet unfitting for the environment in which he was speaking. More
False Prophet Bob Schrecengost of Voice of Tomorrow Ministries came to Moncton, NB, Canada on October 6th, 2015, with approximately 100 people in attendance. The gathering was held at Crandall University's Briton Auditorium and hosted by a young couple who appear to be very genuine. A few different churches were in attendance and as the worship music was taking place, a clear spirit began to manifest. I'm OK with this; if an individual feels the need to shake, rattle and roll, by all means have at it! Personally speaking, I don't feel the need to shake my head, jerk my body and make strange noises in order to "prove" that the Holy Spirit is on me. In fact, I believe the opposite is true; if one acts in a manner which is strange - it "can" be the Holy Spirit but often is not. It's merely the individual's own emotions. Afterall, do these "spiritual giants" act all wacky and messed up while at work? lol. I highly doubt it.
Download: epub mobi (Kindle) pdf more Online Reader
lrf pdb txt
Price: Free! USD
Add to Library
Create Widget
Tags: false prophets false teachers false prophecy bob schrecengost false prophet bob schrecengost prophet bob schrecengost
About Danny Lirette

Dan Lirette is a Christian, author and church planter in Moncton, NB, Canada. You can visit Dan's official website at http://www.danlirette.ca

You have subscribed to alerts for Danny Lirette.

You have been added to Danny Lirette's favorite list.

You can also sign-up to receive email notifications whenever Danny Lirette releases a new book.