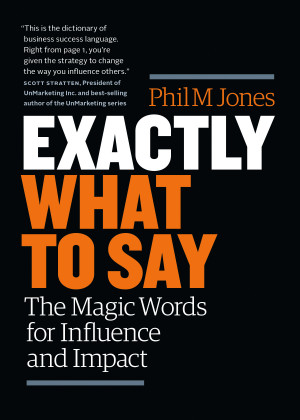 Exactly What to Say: The Magic Words for Influence and Impact

Best-selling author and multiple award-winner Phil M. Jones is highly regarded as one of the world’s leading sales trainers. He has trained more than two million people across five continents and fifty-six countries and coached some of the biggest global brands in the lost art of spoken communication. In 2013 he won the British Excellence in Sales and Marketing Award for Sales Trainer of the Year, the youngest-ever recipient of that honor. He has also written a series of best-selling books and developed a number of online training courses that have enrolled tens of thousands of members around the world. Phil divides his time between London and New York.

Praise for Exactly What to Say:

“Abracadabra—you are a millionaire! That is what will happen if you follow the advice from Phil Jones in this book.”
—Jeffrey Hayzlett, primetime TV and podcast host, chairman of C-Suite Network

“Indeed, the right words spoken the right way, while perhaps not actually magic, can sure have the results of such.”
—Bob Burg, co-author of The Go-Giver

“I think Phil says it best himself at the end of this fabulous read: “Everything you have learned in this book is simple, easy to do and works.” It’s tried and tested, proven and guaranteed to help you get your own way more often.”
—Philip Hesketh, professional speaker and author on the psychology of persuasion and influence

“If you want to get prospects, clients, colleagues, bosses or anybody to say “yes” to what you want, I have three magic words of advice for you: “Get this book!”
—Sylvie di Giusto, keynote speaker and corporate image consultant

“This book is packed with ideas and easy-to-implement suggestions that will assist any individual in obtaining the outcomes they require from the conversations they have.”
—Grant Leboff, CEO, StickyMarketing.com

“Exactly What to Say is packed full of real-world solutions that will lead you to achieving the outcomes you desire in life and business.”
—Richard Dixon, director, Holidaysplease

“If you want to sell more and influence better, then this book is as close as you’ll get to a magic wand or silver bullet to success!”
—Rob Brown, founder Networking Coaching Academy and bestselling author of Build Your Reputation

“Phil Jones helps uncover the truth in complex selling situations. These powerful phrases demonstrate how to influence others with integrity while never seeming pushy. You’ll use these gems each and every day.”
—Ian Altman, co-author of Same Side Selling, Forbes.com columnist

“Exactly What to Say could replace just about every other book on human behavior—it’s that useful.”
—John Jantsch, author of Duct Tape Marketing

“In this short but powerpacked book, [Jones] shares how to use certain key phrases to help you with the winning edge.”
—Bryan Eisenberg, NYT bestselling author of Waiting for Your Cat to Bark? and Be Like Amazon

“Exactly What to Say is a must-read for anyone looking to be more persuasive in their business and personal lives.”
—Seth Price, bestselling author of The Road to Recognition

Phil has accomplished more than most in his fast-moving life. His vast experience in a variety of sectors has resulted in him being recognized as an authority of sales psychology and negotiation, for increasing corporate turnover and profitability, and business development.

Phil started in business at just 14 years of age and clearly demonstrated the qualities of a budding entrepreneur. Following developing a number of successful business ventures through his teens, Phil decided to embrace the corporate world and joined the Management training program of one of the UK's leading department store groups.

Within months of joining and at the age of just 18, Phil was rewarded with the role of Sales Manager and was soon running teams of people, responsible for sizeable turnovers and gaining some very impressive results.

Phil was fast tracked through the Debenhams ranks and was involved in a number of store openings, and turnaround projects continually building his reputation by delivering exceptional results.

Phils’ next role was to join Britains’ biggest furniture retailer as their youngest ever Store Manager. Here he developed his skills further by being involved in improving and developing the sales skills of everybody he worked with delivering exceptional results.

From here he has held roles as head of retail with Birmingham City Football club and developed a number of commercial relationships for Leicester City Football Club before building a property business responsible for sales of over £240million per year.

With a track record of developing opportunities for organizations at all levels, Phil is acknowledged for his strategic intellect and has been instrumental in turning around underperforming businesses by developing new opportunities.

What makes Phil special is that through all his experiences he continues to learn. He has written journals since his first business began and collected countless lessons along the way. This meant that in 2008 when Phil decided his true passion was to shake up the business education market by offering something unique he was set to make a massive difference.

The business launched by developing a simple one day workshop titled Reaching New Heights. In its first year Phil took over 2500 people through these lessons and continued to build his reputation. This lead to an influx of speaking opportunities, consulting offers and private mentoring.

In April 2011 Phil took the decision to share his material and business systems with a group of like minded professionals keen to help their local business communities too. Reaching New Heights was launched as a business and we now have a team of trainers,coaches and mentors delivering Phil's message across the globe.

Phil continues to be at the forefront of the business and works closely with the team and a number of private clients. He is a regular guest speaker and continues to build his reputation through his writing and recording of his experiences.

In 2012 Phil released both Toolbox and Magic Words and both of these books have reached high acclaim from all who have read them. Phil's Accelerator program provides his expertise in Audio CD meaning that he can share his expertise across a huge area and in a format accessible by all.

Put simply; Phil Jones has developed processes and procedures which help people win more customers, who are encouraged to invest more frequently and return more often. Phil is not a theorist, but is a business educator who speaks from his own experience. His mission is the change the view of salesmanship and help the world see that “sales” is not a dirty word.

From working with small business owners that are looking to increase sales to leverage their livelihood to globally recognized companies that want to drive more activity from their staff – Phil’s unique skillset allows him to serve a vast mix of people with entirely different goals.

Phil’s passion to “Teach The World To Sell”, now sees him travelling the globe speaking to a breadth of audiences, from small business owners to workforces and mass organizations, spreading his message and sharing his highly credited teachings. To date he’s spoken in 56 different countries across five continents and with his growing popularity, he’s expected to add many more to his roster.

"Phil was invited to be our keynote speaker to an audience of successful entrepreneurs setting up a day focused on sales and marketing. Phil is a phenomenally effective speaker, blending great stories with compelling and simple messages leading to some obvious takeaways. Phil's investment up front to understand the audience and their challenges and to tailor the message maximized audience engagement and content relevance. I wouldn't hesitate to recommend Phil."
--Gordon Stoddart - Founding Director of Innergy and The Recruitment Network

You have subscribed to alerts for Phil Jones.

You have been added to Phil Jones's favorite list.

You can also sign-up to receive email notifications whenever Phil Jones releases a new book.