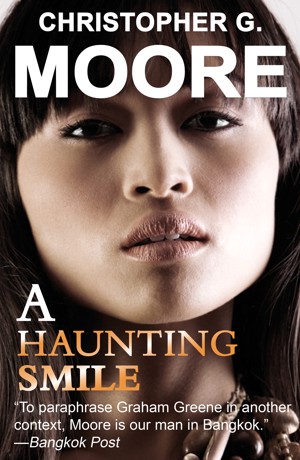 By Christopher G. Moore
Bullets are flying in Bangkok. Tuttle is upcountry when he hears Snow's BBC live report above the sound of M-16 fire direct from the urban battlefield near Sanam Luang. Tuttle, Snow, and Crosby return to HQ - the night-time meeting place on Sukhumvit Road where angels and devils, locals and foreigners, and the living and dead arrive after midnight to lease a few hours of pleasure... More
A Haunting Smile, the final novel in the Land of Smiles Trilogy, is a sharply observed picture interweaving documentary film technique and montage to convey the psychological horror, personal anguish and despair of the Black May of 1992 when students, workers, along with mobile phone carrying yuppies were massacred by the military on the streets of Bangkok.

Robert Tuttle and George Snow, running at break neck speed down the back alleys, hope to find a safe passage out of the nightmare of killing. The ghosts from old battlefields wander the waterholes of Patpong mingling among the drifters, demimonde arms dealers and journalists. Together they enter a matrix where massacres are a way of life, and the survivors bringing back tales of midnight secret executions.

“A Haunting Smile is disturbing. Moore jars the senses with discordant juxtapositions of his now familiar HQ, an all-night coffee shop where stereotypical ‘hardcore’ (read ‘cured of romance’) farang hang out, indulging in a never-ending cycle of alcohol and sex, with the shattering events of Rachadamnoen Avenue, and what! Virtual reality?”
—Bangkok Post

Canadian Christopher G. Moore is the creator of the award-winning Vincent Calvino Private Eye series and the author of the Land of Smiles Trilogy.

In his former life, he studied at Oxford University and taught law at the University of British Columbia. He wrote radio plays for the CBC and NHK before his first novel was published in New York in 1985, when he promptly left his
tenured academic job for an uncertain writing career, leaving his colleagues thinking he was not quite right in the head.

His journey from Canada to Thailand, his adopted home, included some time in Japan in the early 1980s and four years in New York in the 1980s.

In 1988, he came to Thailand to harvest materials to write a book. The visit was meant to be temporary. Twenty-six years on and 25 novels, three anthologies, and six non-fiction titles. There are fifteen novels in the Vincent Calvino series. He lives Bangkok.

His novels have so far been translated into Chinese, French, German, Hebrew, Italian, Japanese, Norwegian, Portuguese, Spanish, Thai, Russian and Turkish. He is published by Heaven Lake Press in Thailand. Four of the Vincent Calvino titles: Spirit House, Asia Hand, The Risk of Infidelity Index, and Paying Back Jack were published by Grove/Atlantic in the United States, and Atlantic Books in the United Kingdom.

His Vincent Calvino series has been optioned for a feature film. 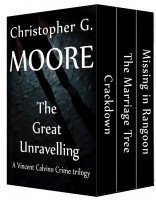 You have subscribed to alerts for Christopher G. Moore.

You have been added to Christopher G. Moore's favorite list.

You can also sign-up to receive email notifications whenever Christopher G. Moore releases a new book.