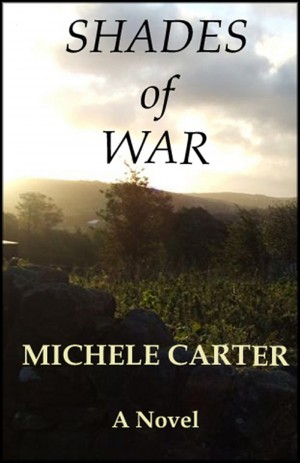 I was born and raised in Vancouver Canada. After graduating from the University of British Columbia with a Master of Arts Degree in English I taught English Lit for several years. I love writing, especially historical fiction that has a little humour for my entertainment and yours. 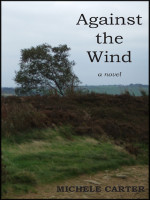 Reviews of Shades of War by Michele Carter

"Shades of War" opens with the unpleasant and rather frightening scene of a Vancouver passenger train coming to a screeching halt when it hits a cow. A cow, a great, lumbering female animal. A bull killed on the tracks would not arouse the same sense of horror as the cow, her head almost severed, is rolled off the tracks and lands with her sightless eyes peering at some buttercups.

The tone and substance are set for this fine novel: women teetering on the brink. Teetering, not from fear or cowardice but from inability to find a purpose in their lives, a sense of direction, fulfillment, happiness. However, men are teetering, too, unsure of what direction to take, how to reach fulfillment but their insecurity is carefully disguised. Even little ten year old Theresa-Marie, the youngest female in the book, has to cope with a rather nasty brother, Christian, who is jealous of her and does everything he can to make her miserable.

Shades of War: war comes in all colors from the frontline to the domestic hearth where women are waiting for their soldier to come home, waiting to be fulfilled. Waiting for something, they may not know what. The women are submerged in a miasma of pervasive melancholy which manifests itself in visions, terrifying nightmares and ghosts. Happiness is elusive and none of the characters has learned how to grasp it.

Clare Tate, a young war widow and suffragette from Toronto, has come to the little town of Rockwater, the last stop of a lecture circuit. It is the day before Good Friday, 1917 and Clare checks in at the Timber Hotel which is run by the three Boisseneau brothers Pierre, Louie and Joe. She has barely unpacked when the cry of murder reverberates throughout the hotel and everyone, including Clare, runs like an animal pack, strangely drawn to the body that has been discovered in the woods. The discoverer of the body is twelve year old Christian, who screams, runs a fever and well, acts like a girl.

As Clare is drawn into the lives of the people at the Timber Hotel and merges with the people in the inn, there is a subtle change in the way she speaks and acts. She had been the school-marm, who spoke in a somewhat trite, somewhat prissy way. When she meets owner Joe and his friend Oscar, who always dresses in a skirt, at breakfast the morning after her lecture, the day after the discovery of the body, the two men, who had attended her lecture, are gentle and encouraging . Clare begins to experience a new awakening, she becomes more sensitive to other peoples’ needs, more tolerant.

Joe always wears a glove on his left hand having shattered it accidently when his gun went off. Here are two imperfect men, Oscar the transvestite, Joe with a handsome face but a ruined hand.

Clare had felt a little full of herself. Her thoughts are drawn to these two men who in their way have faced emotional hardships just as great as the loss of her husband. Louie, one of the three brothers who runs the hotel has secrets of his own: he likes to sneak into the local brothel and get tied up and whipped as foreplay.

Louie is arrested for the murder of the girl, whose name it has been discovered is Heidi, and she is one of the prostitutes in the local brothel. The women associated with the hotel where Clare is staying, beg her to help them get Louie freed. Clare is given a challenge and that challenge acts like adrenaline. Instead of constant introspection, here is a clarion call to help somebody else. And this rustic town, this backwater place will teach Clare something vital- like how to live. And with her mind on others, she begins to heal.

Shades of War is both a mystery and a social commentary. The women of Western Canada win a great battle over Easter weekend 1917: they have won the vote. However, the skirmishes between man and woman can only end when the two sexes respect each other as equals . Even the male chauvinist, Pierre, who before this weekend had felt “God could count on Pierre Boisseneau to praise the glories of war” and who had firmly believed in male superiority, turns to the skirmishes between men and women and muses “maybe we are all the same…men and women equally alone and equally confused.” Even little Theresa-Marie manages to give her tormenting brother, Christian, a blow on the head that sends him reeling. Equality does not mean woman is a doormat.

Many of the characters in the novel undergo a baptism of fire but they emerge unscathed because the dark glass they have been looking through has suddenly been pierced with light. They learn where their happiness lies and they learn how to achieve contentment. Two historical victories are won over that Easter weekend of 1917: women in Western Canada have won the vote and the 2nd Canadian Corps, fighting in France, has captured Vimy Ridge, a major achievement against the Germans.

Author Carter brings the novel to a satisfying conclusion, and you’re very likely going to think about the relationships in your life as you close the book.

I absolutely loved this book. I read my friend's copy of this and ‘Charlotte Brontë’s Thunder’ and wanted my own copies to reread. ‘Shades of War’ has this interesting setting of a small town in 1917 that quickly drew me in. I loved the characters so much I wanted to know more about them after the book was over. The romance is sweet and the mystery is resolved in a surprising way, and the ghost story was chilling, but the characters really made this book worth a reread. Wonderful writing and excellent research

You have subscribed to Smashwords Alerts new release notifications for Michele Carter.

You have been added to Michele Carter's favorite list.

You can also sign-up to receive email notifications whenever Michele Carter releases a new book.