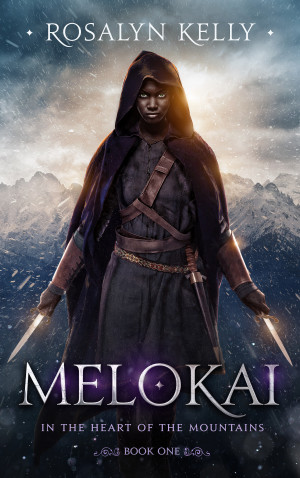 Rated 5.00/5 based on 1 review
Legendary warrior Ramya has reigned over Peqkya as Melokai for twelve years. Prosperous, peaceful, and happy, her people love her…or so she thinks. But Ramya’s time is up. Bracing herself for the gruesome sentence imposed on all Melokais who have served their purpose, she hears instead a shocking prophecy. Before she can unravel it she and her fearless warriors must crush a catastrophic rebellion. More
A ruler betrayed by those closest to her. A young warrior with fearsome powers. A ruthless matriarchal land on the brink of destruction.

Legendary warrior Ramya has successfully ruled as Melokai for longer than most. Prosperous, peaceful, and happy, her people love her. Or so she thinks.

Ramya’s time is up. Bracing herself for the gruesome sentence imposed on all Melokais who have served their purpose, she hears instead a shocking prophecy.

Is the abrupt appearance of a mysterious, eastern cave creature the prophesied danger? Or is it something darker, more evil? And what of the wolves? Will the ferocious war with their kind oust her from power?

Suddenly Ramya must fight threats from all sides to save her mountain realm. But while her back is turned, a conspiracy within her inner circle is festering. Ramya and her female warriors must crush an epic rebellion before it can destroy her and devastate her beloved nation.

She thinks it’s the end, but it’s just the beginning...

Rosalyn Kelly grew up in the magical New Forest in the south of England and has lived around the country as well as in the Middle East, and travelled all over the world.

She studied English Literature and Language at Oxford Brookes University before embarking on a PR and marketing career.

The inspiration for her epic fantasy trilogy came when she was trekking in the mountains of Nepal's stunning Annapurna Sanctuary.

When she's not putting her heart and soul into Book Three of the In The Heart of The Mountains trilogy, she daydreams about where to travel to next, paints with acrylic, reads voraciously and writes book reviews on her blog.

Reviews of Melokai by Rosalyn Kelly

Melokai: In the Heart of the Mountains by Rosalyn Kelly is an engrossing, dark and diverse fantasy that propels you into the world immediately. The cover alone promises an epic read, and author Kelly didn’t disappoint.

In the opening, Melokai Rayma is accompanied by her counselor and Head Scholar, Chaz, to entreat the Stone Prophetess Sybilya. Each Melokai ruling the matriarchal society of Peqky serves for a decade, and then a new Melokai is elected. After which, the departing ruler’s tongue is removed and they’re banished from Peqky. This isn’t a prospect that Rayma or her counselors relish, since their fates would be the same, save the banishment.

Rayma visited the stone goddess each week for her ruling, but instead of proclaiming Rayma’s rule at an end, the goddess remained silent. As a result, Rayma had ruled two years longer than any other Melokai. Howbeit, this visit would be different. The stone goddess spoke a prophecy that will inexorably alter the Peqkyians future.
Although bemused by the prophecy, Rayma continues to lead her people and make great strides to improve the lives of her denizens as well as lessen the severe treatment of the pleasure peons (PGs). Regardless of some opposition, she is loved by her people and surrounded by loyal counselors and warriors. Or is she?

The Peqkyian society is also intriguing. Most inhabitants display catlike features and also communicate with their feline companions. In the times of Xayy, a thousand years past, men had a place of ruler as the Melokaz. However, after the then stone prophetesses cursed them, that changed, and now the males (peons) are considered lesser citizens, and nothing more than a means to procreate and provide physical pleasures. Unfortunately, if males can’t demonstrate their ability to provide the latter, they are disposed of in a most horrific way. The PGs (male pleasure givers) existence is better than most other males. Notwithstanding the threat of castration and an excruciating death if they can’t satisfy their female summoners, they live and are treated modestly well.

Another interesting (and relevant) element is the Peqkian children. Women can choose a soulmatch if they feel connected to a certain male. Evenso, once they birth children, they’re taken to a communal pen. Naturally, with the use of PGs, women are pregnant often, and Peqkian law mandates that no child can know their parents and vice versa. “Mothers” have positions in each pen facility to rear and teach these children until they reach the appropriate age (fifteen). If the young boys can’t pass a ‘usefulness test,’ they are disposed of immediately.

With the dire implications of the prophecy, distrustful allies, warring wolves, and a banished, foreign Trogr (Gwrlain) arriving in the city, fealties are wavering, and the brittle filament tethering the Peqkian together could shatter at any moment.

That’s quite a bit to absorb, but it’s merely the tip of the iceberg. Author Rosalyn Kelly has created a vividly intriguing world pervaded with new species, deities, talking animals, concepts, great battles, and milieus that immerse you in this epic world whilst tickling every fantastical desire to satiate even the finickiest of readers. With numerous sub-plots, betrayals, manipulations, and intricately scrupulous treacheries, you’ll barely have time to catch your breath.

Melokai by Rosalyn Kelly effectually whisk you through multiple lands and societies (not all human), and a huge cast of interconnected characters. With the sexual content and brutalities, it’s intended for mature readers and not those unfamiliar with dark or grimdark fantasy. I don’t have an issue with such content when it’s used for characterization and along with the plot…not in place of one. Melokai is the former, and I was captivated from page one, and can’t wait to see what’s next revealed...especially with Sarrya, V, Artaz, and Gwrlain. What appears to be an end will certainly be a new beginning.

You have subscribed to alerts for Rosalyn Kelly.

You have been added to Rosalyn Kelly's favorite list.

You can also sign-up to receive email notifications whenever Rosalyn Kelly releases a new book.