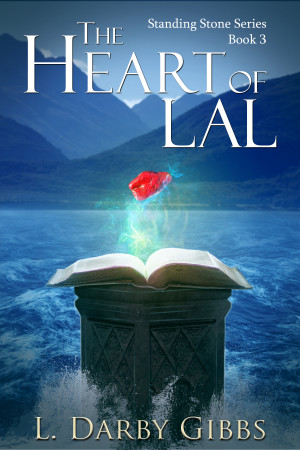 The Heart of Lal

Jahl’s certain Donya is up to some sort of mischief, separate from having their first child any day, and Rouen has received a mysterious package from the young twai wielder they met in Carolan Faire last year.

What starts out as a short trip to the headwaters of the Naigan River turns into one mad dash after another. The ladies of the lake steal his newborn daughter. A small mountain predator has attached itself to Rouen, and a mystery at the capital places them all in danger when the Martan’s Ferry council is attacked.

If he fails to protect the council, Chussan Faire will be next to suffer, and his small family won’t survive the onslaught.

Read the third book in the Standing Stone series because magic has taken on a whole new twist for Jahl, Donya and Rouen.

L. Darby Gibbs has been publishing science fiction novels since 2011. She has a five-book time travel series called Students of Jump. Since 2018, Gibbs has been writing fantasy, and has three series out: Solstice Dragon World (four standalone books), Standing Stone (four series books), and her newest Kavin Cut Chronicles (a trilogy in progress).

Gibbs is a teacher of writing and published a non-fiction reference book of traditional story plots titled THE LITTLE HANDBOOK OF OF NARRATIVE FRAMEWORKS in 2013.

Gibbs enjoys going to the theater, reading, traveling and spending time with her family and pets. She has been married more than thirties years, has one child and a Labrador. She lives in the United States and has lived in several states north, east, west and south. Though born on the east coast, her roots are buried deepest in Southern California.

About the Series: Standing Stone

The Standing Stone series is set in the magic Lands of An Faire and follows the adventures of Jahl Pratter and his two friends, Donya and Rouen, as he learns how to wield essence and fulfill the role his uncle, High Master Tran Donnel, trained him for. Fantasy, magic, light romance and adventure.

You have subscribed to alerts for L. Darby Gibbs.

You have been added to L. Darby Gibbs's favorite list.

You can also sign-up to receive email notifications whenever L. Darby Gibbs releases a new book.