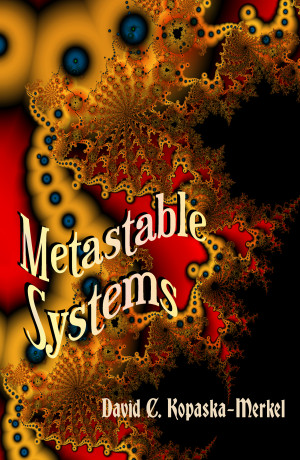 How can a water bear (also known as a tardigrade, one remarkably tough micro-animal) be a superhero?

Such questions lie at the heart of David Kopaska-Merkel's speculative verse. He is himself a scientist -- a geologist -- and this is Science turned sideways. Warped in ways only someone with deep, abiding knowledge and love could even consider. Science powering a true poetry of ideas.

Whether he turns his artistic vision to science fiction, fantasy, or the dark fantastic, an unsettling amount of real information seeps in. The femmes fatale of Lovecraft's Innsmouth are scarier for being categorized by species. Suicide by walking on the Sun is analyzed in detail, then found to be impractical. Microscopic aliens lurk everywhere, but they can't eat us.

Or at least digest us after they've tried.

There's a distinctive voice at work here -- a dry, subtle humor that can turn chilling. Science isn't always pretty. It is, however, infinitely inspiring. At least, it seems to be for Kopaska-Merkel, one of the most productive poets around. His name turns up regularly in publications large and small, print and digital. His blog offers readers new works almost daily.

And then there's Dreams and Nightmares, his venerable speculative poetry magazine -- on issue # 106 at the time of this writing. Kopaska-Merkel isn't just concerned with his own outpouring of ideas. He's been curating a home for the ideas of others since 1986.

Many of the poems you're about to encounter are quite short, like showers of sparks. (Or meteors.) Others are extended wry observations: did you ever stop to think about . . .?

How a water bear, scaled up, would actually make an amazing superhero. What happens when a cat goes nova. What might be the result of . . . well, just about any geeky, unlikely, but scientifically detailed event that could only happen in a poem like this.

David Kopaska-Merkel always stops to think about. But never for too long.

There are so many other ideas impatiently waiting to be formed into lines and stanzas. Given disturbingly apt titles, or running silent with none at all.

David C. Kopaska-Merkel has been writing SF and fantasy since the 70s. He edited Star*line [journal of the Science Fiction and Fantasy Poetry Ass’n (SFPA)]in the late ‘90s, and later served as SFPA President. Many of his poems have received Rhysling nominations, and he won the Rhysling award for best long poem in 2006 for “The Tin Men,” a collaboration with Kendall Evans. He was voted SFPA Grand Master in 2017. His poetry has been published in scores of venues, including Asimov’s, Strange Horizons, and Night Cry. He edits and publishes Dreams and Nightmares, a genre poetry zine in its 31st year of publication. Blog at http://dreamsandnightmaresmagazine.blogspot.com/ featuring a daily poem. @DavidKM on Twitter. He lives in a centuried farmhouse that has been engulfed, but not digested, by a city.

You have subscribed to alerts for David Kopaska-Merkel.

You have been added to David Kopaska-Merkel's favorite list.

You can also sign-up to receive email notifications whenever David Kopaska-Merkel releases a new book.