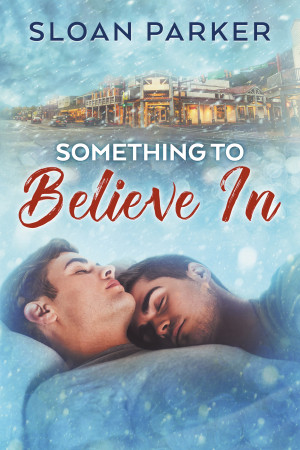 Something to Believe In

By Sloan Parker
Rated 5.00/5 based on 2 reviews
Two best friends fall in love and search for a way to stay off the streets and build a future together. More
When some extra cash lands best friends Sean and Gavin alone in a hotel room until Christmas, they can no longer deny their feelings for each other. Even with no place to live and no job prospects, Sean is determined to not just show Gavin what a real home and holiday is like, but to keep them off the streets for good and build a future together.
Available ebook formats: epub mobi pdf html
First 20% Sample: mobi (Kindle) Online Reader
Price: $2.99 USD
Buy Add to Library Give as a Gift
How gifting works
Create Widget
Tags: drama gay romance gay fiction angst mm romance friends to lovers lgbt fiction gay love story male male romance hurt comfort
About Sloan Parker

Award-winning author Sloan Parker writes passionate, dramatic stories about two men (or more) falling in love. She enjoys writing in the fictional world because in fiction you can be anything, do anything—even fall in love for the first time over and over again. Sloan lives in Ohio with her partner and their neurotic cats. Her greatest moments in life are spent with her family, her friends, and her characters.

To contact Sloan, find out about her books that are available for purchase, and read free stories, visit: www.sloanparker.com. If you'd like to be notified of new releases and get exclusive sneak peeks, be sure to sign up to receive Sloan Parker's newsletter via her website.

Reviews of Something to Believe In by Sloan Parker

Short, angst and sweet...
A very sweet story about 2 guys in a very bad situation
But found love and hope.

Shortly before finishing high school, Sean had to leave home. His parents rejected him for being gay, and his mother's cruel words still hurt two years later. Without education, without work, he survived on the street with difficulty. One night, in a shelter, his path crossed Gavin's, and their lives changed completely.

I loved Sean and Gavin. They would do anything for each other. They both have. They want to protect the other, so he doesn't have to sold himself. They want to save themselves.

It hurts that Gavin doesn't believe in himself, that he thinks he's useless. No one believed in him before, until Sean did.

Their first time was magical. Not only sex, but how they opened up to each other.

I loved them together.

I loved Sean's grandparents. They were still looking for him. They wanted him with them. And they accepted Gavin, they loved him. As his grandfather says, it doesn't matter who he loves. It matters that that person makes you happy, and they see that they are.

You have subscribed to alerts for Sloan Parker.

You have been added to Sloan Parker's favorite list.

You can also sign-up to receive email notifications whenever Sloan Parker releases a new book.