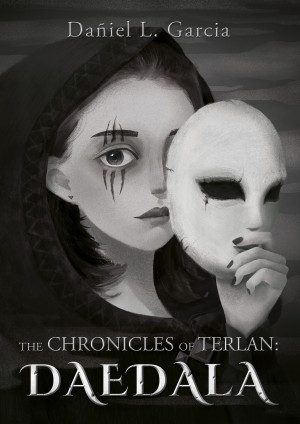 The Chronicles of Terlan: Daedala

Dañiel L. Garcia was born in Bitburg, Germany into a German/Puerto Rican household. Growing up with Star Trek, fantasy books, and American comics from his father he began reading from an early age. There is photographic evidence of his father holding a child in one arm while holding a book in the other, so it is indeed hereditary.

After a short run in with computer science Dañiel matriculated at the University of Trier, initially studying Japanology and Computational Linguistics. He slowly leant towards a major in Japanology with two minors in English Literatue and Media Science, specialising in Film.

The year of study in Japan reopened his eyes to writing and he began work on his "Daedala" story. In 2015 he graduated Magister Artium (~Master of Arts). Having already written most of the manuscript before starting his Magister thesis he continued to write after finding his day job. Inbetween he managed to self-publish his first work, the short story "Just For A While".

Next to writing his book, he also worked as a freelance translator, and occasional animator. He is inspired by classic science fiction and fantasy themes, and likes creating characters with their own unique abilities and flaws.

Reviews of The Chronicles of Terlan: Daedala by Dañiel L. Garcia

You have subscribed to alerts for Da&ntilde;iel L. Garcia.

You have been added to Da&ntilde;iel L. Garcia's favorite list.

You can also sign-up to receive email notifications whenever Da&ntilde;iel L. Garcia releases a new book.