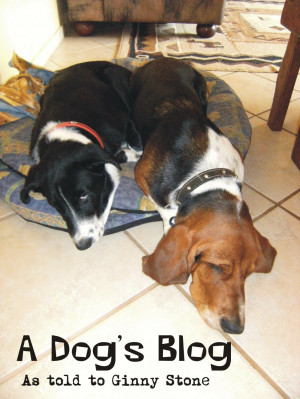 By Ginny Stone
This book is the first in a compilation of blogs that ran as a weekly newspaper column for many years. A hilarious look at the life of Zed, the most adorable Basset Hound in the world and Skunk, the flying punk, two of the most irresistibly wicked, ridiculously naughty South African canines. From their point of view. More
Greetings and salutations! I am Zed – the most adorable Basset Hound that ever existed. Well – that’s what “Mom” says, so obviously it’s true. Before you go any further you should know that you have to read this in a low voice because that’s how I speak – none of this squeaky high pitched stuff – that’s for the punky little mutt, Skunk, that I have to share my basket with…

This book is the first in a compilation of blogs that ran as a weekly newspaper column for many years. A hilarious look at the life of Zed, the most adorable Basset Hound in the world and Skunk, the flying punk, two of the most irresistibly wicked, ridiculously naughty South African canines.
The blogs are written by the dogs!

If you are a grammar freak you should probably skip this story because some of the text is in Doglish with bits of it Catlish too. However, if you love your pets as much as we do – you’ll totally relate to this book.

“I loved it when the column landed on my desk. Quirky, funny, stubborn, opinionated Zed’s take on living in the Stone household, and his observations of the two-legged creatures who shared his space, was a wonderful reprieve from complaints about potholes and reports of hijackings.” –says Cathy Grosvenor, editor of The Springs Advertiser at that time.
Available ebook formats: epub mobi pdf lrf pdb txt html
First 20% Sample: epub mobi (Kindle) lrf more Online Reader
pdb
Price: $2.99 USD
Buy Add to Library Give as a Gift
How gifting works
Create Widget
Tags: pets dogs family life dogs and cats pets dogs family comedy pets as family pets and dogs
About Ginny Stone

Reviews of A Dog's Blog by Ginny Stone