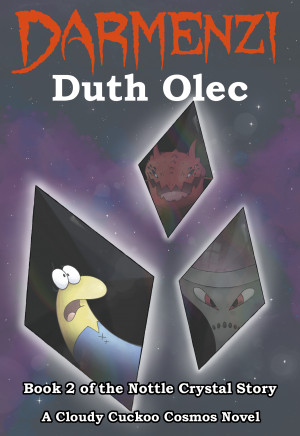 By Duth Olec
An anxious bundle of nerves--a slube named Numer--must save the world from an authoritative conqueror and a manipulative force of chaos. Numer and his friends beat The Conqueror once before, but with a diabolical new force causing mayhem, it's anyone's game. More
One year ago, The Conqueror died, his plans stopped by three unassuming slubes. The happenstance hero Numer hoped to return to a quiet life after saving his world. He was even building the courage to admit his love to Cherry. But everything goes awry when an ancient demon is released from their prison and shatters the ancient crystal that had imprisoned them. Who would release a demon from its prison, though? A madman? A madwoman? Apparently!

As if that’s not enough, The Conqueror survived, and he’s taking matters into his own tentacles. Directly leading a band of ridiculous Mintop agents (his ranks reduced from his previous defeat), Conrad once more aims to take the ancient crystal to power his invasion force. Now there are three sides: one that wants to rebuild the crystal, one that wants to utilize its power, and one that wants to destroy it.

But not everything is as it seems. Just what is the extent of this demon’s power? And what’s with these giant beasts that keep appearing? Perhaps they hold some sort of secret. Perhaps Numer will go bananas (he's yellow enough for it) trying to solve that mystery. Whatever they are, one thing becomes clear: It will not be so simple to save the world this time around. A sequel to the book Slubes, the manic presenter Duth Olec once more pulls readers and narrator Wally Plotch into a high-stakes and humorous story with a returning cast of crazy characters and all-new faces.
Available ebook formats: epub mobi pdf lrf pdb txt html
First 15% Sample: epub mobi (Kindle) lrf more Online Reader
pdb
Price: $1.00 USD
Buy Add to Library Give as a Gift
How gifting works
Create Widget
Tags: adventure humor fantasy funny meta anxiety slugs science ficton alien world nonhuman
About Duth Olec

Reviews of Darmenzi by Duth Olec