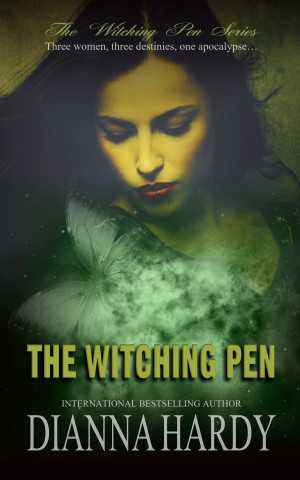 Rated 4.75/5 based on 4 reviews
It's hard being the most powerful witch on the planet. It's even harder when you're a twenty-five year old virgin who'll lose all of that power the moment you sleep with someone ... that's why Elena's never slept with her best friend and flatmate, Karl, despite the true feelings they harbour for each other.

But on discovery of a magic pen, Elena's life is about to get a whole lot worse... More
(Brand new cover! Same content.)

It's hard being the most powerful witch on the planet. It's even harder when you're a twenty-five year old virgin who'll lose all of that power the moment you sleep with someone ... that's why Elena's never slept with her best friend and flatmate, Karl, despite the true feelings they harbour for each other.

Elena's about to discover that there are even more difficult things in life to deal with. One of them comes in the form of a pen she discovers one day, a pen that allows anything she writes to come to pass...

Suddenly, it's not just her powers or her heart that's at stake, but her very soul, as a dream demon with a seductive pull uses the pen to try and turn her away from her reality, and from Karl.

But the pen is just the beginning. Everything Elena has believed in is a lie, and her world is about to fall apart...

"I loved this story, so full of romance and magic, not to mention a very intriguing Demon Mythology created by the author." - Bookaholics Book Club (Ninfa's Bookaholics Factor)

"...a great start to a good series." - Romance Novel Junkies

About the Series: The Witching Pen

Elena, a thirteenth generation witch, is the most powerful witch on the planet; Amy is hidden from her true self, and Mary feels the pain of mankind.

On the appearance of a magic pen, three women uncover family secrets and deep betrayal, to discover they are more than they've been led to believe - for better or worse.

Alongside the men, demons and angels who love them, they are thrown into a supernatural world where time becomes muddied, where new and ancient merge, where forged bonds cannot be broken, and matters of the heart are never black and white.

And then, there's the impending apocalypse.

Unique, fun, fast-paced, sexy and passionate, this is paranormal romance that combines the dark with the light, and the sweet with the gritty.

Also in Series: The Witching Pen

This is the full length story of Elena and Karl and it starts when Karl is 27. For a long time, Elena and Karl have kept their relationship purely platonic due to circumstances "beyond their control" but things are about to change.

This story is full of action, romance, drama and suspense. You find out little snippets as you read along and the characters are built up. There is no insta-love in this book, just a deep and true friendship that could always have been something more if things had been different.

Absolutely brilliant and an ending which definitely makes you reach for the next book in the series!

Thank you Author Dianna Hardy for this phenomenal “Gift” of The Witching Pen. I actually read “Wilted” first and wanted to get hold of the others to read as a series. Now here I am writing this review, having done the review for Wilted already.

To follow is my fair and unbiased opinion of “The Witching Pen.”

After a talk with her mother, Elena learns that its absolutely impossible to have a “normal” relationship wit men. The stakes are high and the losses are great if she does. (I won‘t tell you why or what because of spoilers).

Elena is a thirteenth generation witch, and she is a VERY powerful witch at that. She has always kept to her true powers hidden, her mother and best friend since kids, Karl are the only ones to know her secret.
I will tell you that Karl has loved Elena since they were young but Elena has always shied away from romantic interludes, and keeps him at a distance… so she won’t be tempted.

The Witching Pen, although is a novella it reads as a full length book. There is so much action happening with all the characters on every page.
You’ll find a storyline that effortlessly flows across the page as you quickly devour each one.

Angels… Demons… and Witches, what a combination!!! AWESOME mix.

Fabulous, entertaining and outstanding series - A friendship that blossoms into love, with unpredictable consequences.

Elena soon discovers that her life as she knows it, and what she’s been told is a lie. That there is so much more than what everyone has told her about! Dark secrets of her family are discovered.
She comes into possession of a pen, yep… The Witching Pen where she can write the future, and to have it come true.. I‘d say, be real careful Elena :-/ . With the pen, a evil demon is attached who invades, haunts and tries to seduce Elena while she sleeps.. Dreams.

I’m going to stop here before I give much more away. If you read the blurb of this book you are going to be hooked just as I was!!!

A must read paranormal romance jammed packed with spectacular suspense. I suggest that if you haven’t had the chance to read this series yet, then take the time and get started.. You won’t be disappointed

The Witching Pen
The Sands of Time
Wilted

Recommend: YA and up
Rating: 5/5 angel stars

Absolutely loved this book and am looking forward to the others in the series.

I loved this book! It is an adult, paranormal love/life story. The characters are very real to life with real life issues. It is a story of love, loss, family and friendship. I highly recommend it!