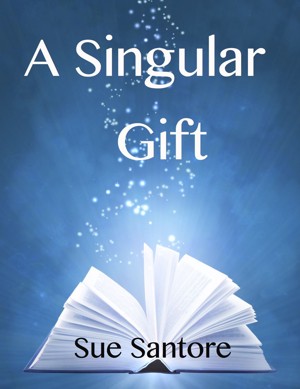 By Sue Santore
Rated 4.75/5 based on 4 reviews
Jean Ryan inherits a singular gift, the gift of magic. She must learn to use her magic gift before the opposing dark magic forces destroy her world. Jean and Wayne, her friend, work together to discover why her gift has attracted the attention of an evil circle of magic users and how to combat them. More
(The title and cover of this book has been changed to fit the content better. The former title was Something Wicked.)

I never dreamed magic was real until my grandmother gave me the box just before she died. She told me to use the box carefully and that I was the only one who could use the box and the artifacts until I passed it on to someone else, that it rested on my shoulders now. But she didn't tell me what "it" was.  At first I used the magic as a toy. I mean, what fourteen-year-old wouldn't? Doesn't everyone wish she could do magic?

Soon I had to show my two best friends. Wayne, my oldest best friend, grew up with me. Karen, my new best friend, only moved to our town last year. Wayne helped me learn to use my magic, while Karen became obsessed with my box and kept trying to talk me into giving it to her.

Horrible things happened. People almost died. Why did so many people want my magic box? With a sense of urgency hanging over me, I had to learn to use my new powers fast.
Imagine my fear when I read Grandma's journals and found what she expected me to use the magical powers for.

How could I possibly do this?

From the time, as a young girl, that she read the Narnia series by C.S. Lewis, Sue Santore has been hooked on fantasy. She loves to read fiction from many genres, but she always winds up going back to fantasy. For years she has had her own fantasy stories spinning around in her head and now that she is retired from many years of teaching, she is putting those stories into book form. She has many interests, including quilting and playing the mountain dulcimer, but writing is the most satisfying of all.

Sue Santore lives in the great state of Maine with her husband of 37 years. She has been a factory worker, a waitress, a librarian, and a teacher. Her biggest job was being a mother and she has three grown children. Now she is a grandmother and enjoying that role immensely.

Reviews of A Singular Gift by Sue Santore

A Singular Gift
By: Sue Santore
ISBN: 2940011446368
Published July 31, 2011
Available Format: ebook
My Rating: ★★★★★
Bonnie Jean Ryan’s grandmother is dying and passes down a very important gift—a gift that will cause Jean to grow up quite quickly. It will be up to her to hastily learn her magic, suppress the darkness, and win a very important battle between good and evil. Along the way, Jean is sure to learn some very significant lessons about friendship, family, selflessness, and love.
This is a fantastic coming-of-age story, with a plethora of little life lessons peppered throughout. In the beginning, it might appear that Jean is kind of a spoiled little brat, in a way. She is obviously the favorite of the dying matriarch and many in her family envy her for that. But, could any of them have shouldered the burden that is placed upon her with her grandmother’s final gift? I think not. Beneath the superficial, Jean is really an old soul with a big heart, albeit a confused one at times. She is sometimes easily influenced, and that has brought about some big problems in her life. Overcoming this vulnerability is one of the major themes of this story. Not only is it wrong to side with evil, sitting back and doing nothing to fight it is just as bad.
I am truly impressed with this story. Sue does such a wonderful job of getting into the head of a young teen and making her life and the lives of those around her so completely believable in the midst of so much fantasy. The book is very clean and great for the younger side of young adults—no language or mature situations to worry about. It reminded me at times of a little Chronicles of Narnia, with the magic hallway bit, especially when they venture into the Winter Room. The writing is spot on and the plot was fleshed out beautifully.
I adopted A Singular Gift and Sue as part of Adopt an Indie month. I am honored to have been able to read and review this delightful novel!

I truly enjoyed "A Singular Gift", despite some "uphill" factors for me. I don't generally read about the present day/real world or female protagonists, I'm a heroic fantasy fan by nature.

But Sue Santore shows such a deft and confident hand in her writing, I was completely absorbed within minutes of starting this book. It would have been so easy to fall down with the classic plot elements; the dying relative, the mysterious box, those first moments that prove magic does exist. But I was drawn in, and found myself moved by the remarkable story of a heroine who at first acts less than heroically (as so many of us would I think, when tempted or pressed).

Jean's character is among the most believable I've encountered since beginning to read tales online. I truly raged at her mistakes, and I rejoiced when she realizes them and resolves to do better. The story matters here, and the level of detail as well as pace created a marvelous reading experience. Even some of the characters I wanted to hate turned out to have hidden depth, revealed by the conflicts of the adventure, that made them much more human.

I was busy the week I started and kept having to stop, but I never wanted to. I assure you, "A Singular Gift" is a marvelous choice for any young-adult through adult reader. I highly recommend this story.

A young girl inherits a gift of magic, with all its potential for good and evil, light and dark. But with her grandmother dead, who will train her? Who will help her distinguish lies from truth?

Ms Santore has penned a beautiful tale of growth and courage...and the price of dabbling in evil. While aimed at teen readers, this is a wonderful story for all ages.

Buy it. You won't regret it!

(reviewed the day of purchase)
A Book Vacation reviewed on Oct. 1, 2011

Overall, I really enjoyed this novel. This is a true coming-of-age novel in which Jean must learn what true friendship is, as well as decide to do right by those around her. I must admit that, in the beginning, Jean was quite obnoxious and her bad decisions made me dislike her quite a lot. However, she does have many redeeming qualities and, as we later find out, not all of her decisions were of her own volition, which helped make me like her much more as the story progressed.

I’d like to say that I would have behaved differently had I been in Jean’s position, but truth be told, I would probably have behaved just as badly as her, especially since power can quickly consume a soul, causing one to act completely different, usually for the worst. I think part of this revelation is why I was so disgusted with her in the beginning, but as I said previously, she does redeem herself, which is good, because the story itself is very well done.

Santore has created a very interesting tale involving magic, a world Jean didn’t know existed until her grandmother passes on, leaving her a box full of mysterious items. I enjoyed learning about the magical realm and watching the characters thrive, learn from their mistakes, and set new courses for themselves. There were a lot of twists within the novel and while some of the events were obvious in coming, others were much more shocking. I enjoy a story where I feel like I know what is happening but am also blindsided by certain situations, making me second-guess myself and the characters on the whole. I really did enjoy this novel and am hoping for a sequel to continue Jean’s fight for what is right. Four stars.

You have subscribed to alerts for Sue Santore.

You have been added to Sue Santore's favorite list.

You can also sign-up to receive email notifications whenever Sue Santore releases a new book.