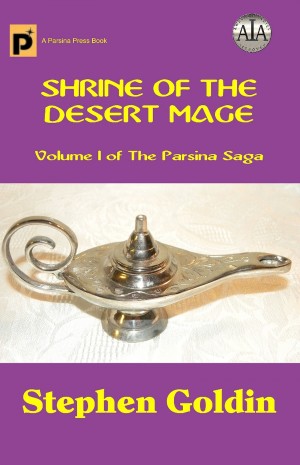 Shrine of the Desert Mage

Starting from the fabled holy city of Ravan, two paths diverge that will take their respective travelers to the farthest reaches of Parsina. The black-hearted thief Hakem Rafi comes into possession of the ultimate power of evil, while the storyteller Jafar al-Sharif and his daughter Selima begin a longer involuntary journey that will test the limits of their ingenuity. But first, they must fool the world's greatest wizard into believing that they, too, are practitioners of the mystic arts.

Thus begins the Parsina Saga, a journey through a world of djinni, flying carpets and high adventure in exotic realms -- with the fate of the world at stake.

About the Series: The Parsina Saga

The Parsina Saga is an Arabian Nights fantasy epic set in a world of djinni, undersea cities, flying carpets, and demons.An impoverished storyteller must masquerade as a powerful wizard to save not only his daughter's life, but the entire world.

Also in Series: The Parsina Saga

I enjoyed this book very much. I think it was a great journey through Arab-style setting and the immense expanse of desert and magic. The story was good, the descriptive words were captivating, the imagery was well-used, and the metaphors were sort of overused (but I couldn't expect less from a story featuring sages and mages).

The characters were well formed, each with distinct characteristics, personalities, souls, and motivations. I like the characterization and plot development that the story took from its beginnings. It seeped in me a feel of familiarity and growth. As the story progressed, more twists were added to the story, making it an exciting read. Though I must confess that many of the twists and whatnot were kind of predictable. For instance, I knew that Jafar would end up with Cari's ring ten chapters before it actually happened. And that some way or the other, Jafar and Ahmad will end up traveling together. The story, though somewhat original, has a familiar sound from all the fantasy-like stories preceding this one. Though "Shrine of the Desert Mage" has its merits as well.

I didn't like how the first book "ended", like it creates an immediate link to the next installment without giving this installment a proper ending. For example, I don't know what happened to Hakem Rafi and Aeshma other that they escaped. For some reason, at the end of the book, the story shifted and focused more on Ahmad, Umar, Jafar, Selima, and Cari and forgot all about everyone else. One thing that I liked about this story was the objectivity and partiality that the author presented each character, giving the same importance to each one. When I first started reading, I couldn't define who the main characters were because he (the author) wrote of everybody with the same importance.

As for the story, great story, as I mentioned before. For some reason I like Cari the best, and Jafar the least. But that might be because of how Jafar cunningly deceived Cari in the beginning. For the technical part of the writing, I can tell the author did a great job at studying the Middle East and desert-like traditions because the entire book was infused with it. He also used beautiful, artistic, and poetic words to describe many of the settings and instances of the book. I feel that I learned a lot of vocabulary words and customs and traditions from that faraway land.

One thing I was slightly annoyed with was how Umar told Ahmad to recite the origin of Parsina to him. It felt like the author was trying to explain the origins of the world through the mouths of their characters, which I find highly acceptable, but overused by so many authors.

The reason I didn't give this a five star (as I wanted to) was because the story didn't "hook" me. I didn't feel the urge to grab my kindle and read it until I felt satisfied with the amount of reading I did during that determined time, or finished it in one day. However, I do recommend this book.

Well, overall I think this is a great story, beautiful writing style, in-depth analysis and presentation of a totally different culture, and spell-binding story. I will welcome the second installment with much eagerness.

(reviewed 53 days after purchase)
sgunnell reviewed on Feb. 20, 2012
(no rating)
very captivating story...I loved the entire storyline..it covered a world of wizards, kings, creatures & peasants..I never knew what was going to happen next in the story...hard to put down

I will definitely be waiting for series #2

I would love to have a "Magic carpet", lol

thanks Stephen for allowing me such a great story

How to describe this book without starting to sound like an over-enthusiastic fan? Very difficult. Very diffcult indeed.

Just let me tell you this:

If you miss the sound of a storyteller painting a whole universe with the sound of their voice, this is the book for you.

If you yearn for something that is more acoustic dream than readable novel, this book is for you.

If you want to hear a story worthy of Sheherazade's beautiful gift, this book is for you.

If you love a fantasy novel that is more fairy tale than anything else, this book is for you.

And to make this book even better, let someone read it aloud to you or even better just let them tell you the story face to face. For this book, this fabulous fantastically dream-worthy book, is a pleasure to 'listen' to even if you are only reading it with your eyes alone. You will simply hear the storyteller's voice in your head.

I love love love this story! My only complaint is that the book does not stand well on its own. It is simply the first part to a much longer tale. You will not be able to read this book and not buy the next ones, because it stops right in the middle of the story. What happened to the days you could buy a great big novel and the whole story was there, no matter how many pages it took??

Anyway, lets get back to the book. I think the writing is brilliant! The story is unique (at least for me)and very interesting. The characters are wonderful, the descriptions are amazing! I was caught up from the beginning. I have no idea where this story is going to go or what might happen and I love that in a book. I love the creatures, wizards, kings and peasants. The history and beliefs of these ancient people have me completely captivated.

I will read every story Stephen Goldin writes, no matter how many books are in the series. I think he is that good! Another favorite Stephen in my Authors list!