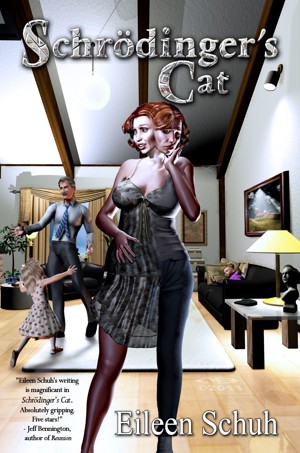 Dr. Penny introduces her to Everett’s Many Worlds Theory of Quantum Physics and Chordelia finds she must make a choice between her realities.

But when that choice is made, will she be able to live with the consequences. More
Chordelia, straddling two of the realities proposed in Everett’s Many Worlds Theory of Quantum Physics, has no idea how distorted the line is between choice and fate.

In one of her worlds, Chorie’s young daughter is dying—a drama that quickly contaminates her other, much rosier, reality. Before long, the emotional burden of dealing with two separate lives spawns heated legal battles, endangers her role as mother and wife, and causes people in both universes to judge her insane. As her lives
begin to crumble, so does Chorie’s heart and mind.

When Dr. Penny, a man with disturbing, murky, hypnotic eyes offers to rid her of the life that’s causing so much pain, she must decide if she is willing to sacrifice the chance to be with her dying child for the chance to save her
marriage and experience happiness.

She thinks she’s planned it well—she’s researched her choices, prepared herself for the consequences, put everything in place. She makes her decision. However....

I found this book to be very interesting and look forward to reading more of Eileen schuh's books.

This is the second novel I have had the pleasure to read by author Eileen Schuh. And while I did enjoy the first book, "The Traz", which is a young adult story, I must admit I personally found "Schrodinger's Cat" even better. Of course, that may be because I am a HUGE fan of psychological thrillers, which is what this story really is. Throughout the book, the author keeps you guessing about whether the main character, Chorie, is really traveling between different realities or whether she has just gone insane from the grief of dealing with a daughter who is dying. This story is told masterfully from the beginning to the end, and the end is one that really leaves you thinking. Just like a good episode of "The Twilight Zone", this story will have you questioning the boundaries of science and reality.