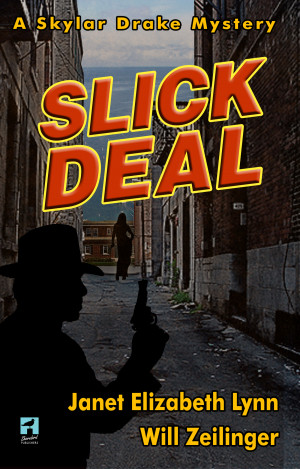 JANET ELIZABETH LYNN was born in Queens, New York and raised in Long Island, until she was 12 years old. Her family escaped the freezing winters and hurricanes for the warmth and casual lifestyle of Southern California.
Janet has always wanted to write and made it a quest to write a novel. Ten years later, with much blood and sweat, her first murder mystery novel, South of the Pier, was published in 2011. She has since written seven more mysteries. Miss Lynn has traveled to the far reaches of the planet for work and for pleasure, collecting wonderful memories, new found friends and a large basket of shampoo and conditioner samples from hotels.
At one time Janet was an Entertainment Editor for a newspaper in Southern California.

WILL ZEILINGER has been writing for over twelve years. During that time, he took novel writing classes and joined writer’s groups, but what has helped the most are published authors who mentor, encourage, critique and listen to him while he continued to learn the craft. At the time of this writing, Will has published three novels (Ebooks.) The Naked Groom, Something’s Cooking at Dove Acres, and The Final Checkpoint (also in print).
As a youth he lived overseas with his family. As an adult he traveled the world. Will lives in Southern California with his wife Janet Elizabeth Lynn, who is also an author. Will says that finding time to write while life happens is a challenge.

Reviews of Slick Deal by Janet Elizabeth Lynn & Will Zeilinger

You have subscribed to Smashwords Alerts new release notifications for Janet Elizabeth Lynn Will Zeilinger.

Would you like to favorite Janet Elizabeth Lynn Will Zeilinger?

You have been added to Janet Elizabeth Lynn Will Zeilinger's favorite list.

You can also sign-up to receive email notifications whenever Janet Elizabeth Lynn Will Zeilinger releases a new book.