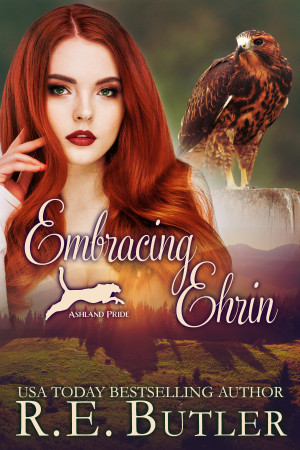 Hawk-shifter Ehrin finds her true self when she meets her mates, Henry and Domino. When her people come for her, will she leave with them or stay in Ashland? Contains m/f/m interaction, a brokenhearted hawk shifter, and the two males who would do anything to make her happy. More
Stepbrothers Domino and Henry Fallon have known for years that they’re meant to share a mate. Domino, a rare albino panther, and Henry, a mountain lion, are ready to start the next chapter of their lives and find their mate.

Ehrin Knox knows why the alpha of her hawk nest called her to his home on a chilly spring morning – it’s not for a cup of tea, but to tell her she’s banned from the nest. Because she was never able to shift, Ehrin couldn’t secure a mate, and once she reached twenty-one and was still unmated, it was the end of the line for her. Only mated males and females could stay in the nest after age twenty-one, an archaic and unfair rule as far as she was concerned. Saying goodbye to her family, she leaves for her friend’s home in Ashland, Indiana, until she can find work and a place to live.

When Domino hosts an art exhibit at the school’s open house, a beautiful redheaded female immediately goes into distress when she sees him. Domino knows the moment he sees her that she’s their shared mate, and he calls Henry. Once the three are together, Ehrin shifts into a stunning red-tailed hawk.
Ehrin’s surprised when her parents show up in Ashland, with her former alpha bringing along a hawk male to mate with her. They want her to choose the hawk and come home. When she can’t have both, will Ehrin choose the pride or her family?

Contains m/f/m interaction, a brokenhearted hawk shifter, and the two males who would do anything to make her happy.

A Midwesterner by birth, R.E. spent much of her childhood rewriting her favorite books to include herself as the main character. Later, she graduated on to writing her own books after "retiring" from her day job as a secretary to become a stay-at-home mom.

When not playing with her kids, wrestling her dogs out the door, or cooking dinner for her family, you'll find her typing furiously and growling obscenities to the characters on the screen.

You have subscribed to alerts for R.E. Butler.

You have been added to R.E. Butler's favorite list.

You can also sign-up to receive email notifications whenever R.E. Butler releases a new book.