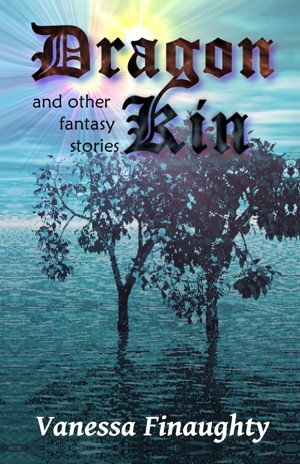 Dragon Kin and other fantasy stories

By Vanessa Finaughty
Rated 4.80/5 based on 5 reviews
The Dragon Kin anthology is a collection of fantasy stories with plenty of twists that will keep you turning the page for more.

In this anthology, a young man's incredible past is uncovered when he saves a young woman from conjured, fire-breathing dragons. A novice wizard’s resolve is tested when he is chased by rabid dogs for accusing a king’s beloved queen of murder. More
The Dragon Kin anthology is a collection of fantasy stories with plenty of twists that will keep you turning the page for more.

In this anthology, a young man's incredible past is uncovered when he saves a young woman from conjured, fire-breathing dragons. A novice wizard’s resolve is tested when he is chased by rabid dogs for accusing a king’s beloved queen of murder. A mother prepares to brave danger by taking on a gluttonous black dragon with an overzealous penchant for livestock in the next valley that threatens, if left unchecked, to see her children going hungry during the looming winter. A cunning assassin sneaks into the castle dungeons to silence a prisoner before his testimony can reveal startling revelations about the queen. A desperate man does the unthinkable when he tries to kill a seven-year-old girl for the bounty placed on her head. An elf risks exposing the world’s best-kept secret – her secret – by embarking on a rescue mission to retrieve captured humans and kidnapped phoenix eggs.

Great set of stories in all different types of fantasy. I love anthologies where you get to sample many different stories and this is a good one.

I recently finished the Dragon Kin anthology and I reviewed each one separately. Here they are:

When I was introduced to Karas, I instantly fell in love with the character. The reason for this could be because I saw a lot of myself in him. Karas' humour was top-notch, even though he meant to be serious. When Karas ventured to the other side of the Great Sea, he wanted to be alone and just live his life in his cabin. As soon as Sasha was introduced, this was when I paused for a long time. I thought about her character for a while, and the Sasha character that Vanessa created for the story left me speechless, and this was not because Karas couldn't stand the sight of her after his cabin was destroyed by the dragon, but because they were two totally different people, and in the end, they worked together.
Vanessa's characters in Dragon Kin were more than perfect. The way they were created just fascinates me. I personally think that Vanessa Finaughty is only giving us a taste of what she is really capable of!
If Vanessa Finaughty wrote a full-length novel with Karas and Sasha as the main characters, I will be in my element!

I immediately felt for Jeepers the second he was introduced. There was something about him that I could relate to, and this is what connected me to this character. Was it his unluckiness? Was it his place in this world? Was it because of the accusations made against him? Was it his impatience of starting something small and mastering it before moving on to bigger things? Yes.
Jeepers’ mind is always calculating. There’s never rest for him. He wants to prove his greatness, and because he has no guide, he tries everything and gets nowhere.

I found the story very, very entertaining. Vanessa Finaughty’s Jeepers’ Creatures is definitely a must-read. It taught me something, and it will definitely teach you something!

Vanessa Finaughty gives you only what you need to get through this story, and this made Kill to Love great. When it all came together, it was unexpected. As you start reading this story, it will point you in a different direction. However, when Vanessa is ready, she will put you exactly where she wants you. And this is not a bad thing. Well done, Finaughty!

Wow! This was truly an entertaining story and very cleverly written. At first, I thought the black-clad man researched what was required of him, like any assassin would do, but then it hit me! Not here to spoil anything for anyone, but Kudos to Vanessa Finaughty for slapping me with the unexpected. Brilliant!

The opening scene, alone, got me excited. Princess Maia really grabbed my attention. Vanessa created a character, a beautiful girl, who I have no words to describe. Not only does she have a few gifts of her own, but she is one of the strongest characters I have ever come across in Vanessa Finaughty's books.

What I learnt from this story is that desperate measures call for desperate times, and sometimes we are pushed to make decisions even if some of them are the wrong ones. We all make choices, and sometimes it takes you to show somebody the worst, desperate side of you before they are able to look into your soul and see the good.

There is not much action in this story, and the way Vanessa put it together, it was perfect and I enjoyed every page. I could sense a build up to something huge especially on Jayla and Abelard's journey to save the phoenix eggs. I got the sense that there was a surprise waiting for Jayla and Abelard around every corner. Although Vanessa didn't keep anything until the end of this story, I found myself paging ahead to find out what happens next, but stopped myself from doing so. This is a brilliant piece of work and it's very well-written. The characters are strong and only Vanessa Finaughty is capable to doing this! I highly recommend this!

Very much enjoyed all the stories in this anthology! My favorite though was Dragon Kin, not only for the way it was written, but for how unusual it was. Vanessa has a way of storytelling I find very refreshing, never the same-old, same-old. If you have not read these, you are truly missing out!

If you're a fan of dragons, deception and diabolical plots, you'll enjoy all the stories in this anthology. A genuine edge-of-your-seat page-turner, this book is bound to have you glued to the pages. The stories are fast-paced, original and gripping, and definitely excellent reading material!

(reviewed the day of purchase)
GlennAndSasha Gabriel reviewed on Dec. 23, 2011

Honestly, I don't know where you come up with this... but for goodness sakes... don't stop!!
Your writing is simply amazing and I'm a huge fan!
So colorful. So dramatic. With each word I see myself there.
Great, great story teller!
Thanks for another superb read!
Sasha