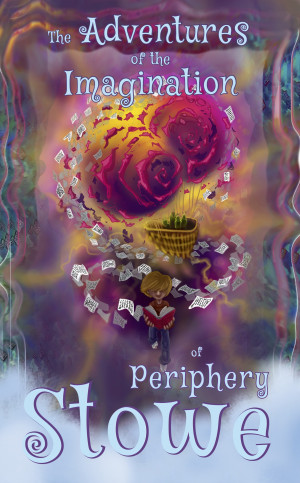 The Adventures of the Imagination of Periphery Stowe

By Josh Wagner
Back when eternal youth was just something folks were learning to live without, all Riggs Bombay wanted was to find a cure for his hallucinations. Instead he found an ancient storybook, coveted by the secret powers of the world. Now Riggs must dodge the grasp of codgers, villains, and philosophers long enough to deliver the book to the one man in the world who wants nothing to do with it. More
The story of a boy and his hallucinations as they journey into the mind of an old man who is dreaming the world.

In search of a cure for the poison that is slowly killing him, Riggs Bombay, the boy who is not afraid of one single thing, sets off in a lung-shaped airship, his toxic hallucinations in tow. While navigating through physical, mental, and spiritual realms, Riggs discovers a most peculiar book, which drives his quest to the farthest reaches of the universe. There, despite the efforts of power-hungry scoundrels, eccentric philosophers, insatiable spirits, and creepy old men, Riggs must deliver the book into the hands of the one person who wants absolutely nothing to do with it!

This “fairy-tales for adults” begins in a world learning to cope without eternal youth, and ends in the ancient mind of Periphery Stowe himself. Spiritual agencies, intent on keeping death right where it belongs, pursue Riggs and his four lovable hallucinations through space and time as he attempts to deliver Stowe’s old storybook to the ultimate source of this twisted and endearing universe.
Available ebook formats: epub mobi lrf pdb html
First 25% Sample: mobi (Kindle) lrf pdb Online Reader
You set the price! USD
Buy Add to Library Give as a Gift
How gifting works
Create Widget
Tags: philosophy airships metafiction airship paradox surrealism recursion whimsy farceosophical fiction fiction clemens
About Josh Wagner

Josh Wagner was born with a hole in his heart, a Ventricular Septal Defect (VSD). He’s fine now. He studied Creative Writing and Lit at the University of Montana, and received his MSc from Edinburgh University in 2019. Though he has worked extensively in comics, film and theatre, prose remains his true and abiding love.

The author of four novels and dozens of short stories, Wagner’s work has been described as surreal and fantastic, metafictional and paradoxical, poetic and whimsical. His stories have been published by Cafe Irreal, Not One of Us, Cleaver Magazine, Medulla Review, Lovecraft eZine, and Image Comics. He is facinated by rhizomes, paradoxes, things left unsaid and the ambiguities tucked inside longing and motivation.

Periphery Stowe Teaser
A teaser based on the novel "The Adventures of the Imagination of Periphery Stowe" by Josh Wagner. This animation was created by Brad Wilson in 2002 using 3D Studio Max.

You have subscribed to Smashwords Alerts new release notifications for Josh Wagner.

You have been added to Josh Wagner's favorite list.

You can also sign-up to receive email notifications whenever Josh Wagner releases a new book.