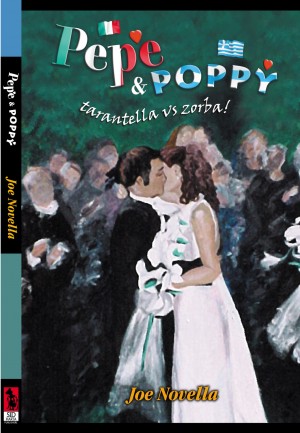 By Joe Novella
Rated 5.00/5 based on 1 reviews
Pepe and Poppy is 'My Big Fat Greek Wedding' meets 'The Wedding Singer'. A heartwarming story of love and acceptance. A true celebration of cultural diversity. If you loved the 80's, if you come from a multicultural family, if you love to laugh, then this is the book for you.

"Loved it! I laughed and cried." Bridgewater USA

"Had me laughing out loud" Rochester USA More
It's 1983 in the multicultural city of Melbourne and the worlds of Italy and Greece are about to collide. Giuseppe Allevoni, from good Italian stock, and Kaliopi Papadopoulos, a good Greek girl, fall in love and set in motion a culture clash that, while at times comical, threatens to tear the young lovers apart.

Set against the backdrop 80's fashion in a world of discos, home-grown tomatoes and pissing-angel fountains, Pepe & Poppy is a charming and heartwarming story about love and acceptance and the universal similarities between us all.

"Loved it! I laughed and cried." Bridgewater USA

"had me laughing out loud" Rochester USA

"A valuable lesson can be learned from reading this book, that other than good fine and wine, a close and loving family - no matter the size - is really the staff of life. Viva Joe Novella!" Australian Provincial Newspapers

Hello there, thanks for checking out my page.

Well, I'm just your ordinary happy-go-lucky type of guy from downunder who loves the beach, his beautiful wife Fiona and playing soccer. I love travel and people, actually I just about love everything. Some day I plan to grow up but I'm in no rush and in the meantime I'm going to do my best to make people smile. Apart from that, I'm the author of 'Pepe and Poppy' and 'The Ultimate Self-Help Guide for Men' (which will be appearing on the upcoming motion picture 'American Reuinion'- part 4 of the American Pie franchise...all very exciting!)

Review
Candida Martinelli reviewed on May 15, 2014

Pepe & Poppy is a romantic-comedy-coming-of-age story set in Melbourne, Australia, within the city's large Italian immigrant community. Actually, Pepe and his brother Charlie, the first-person conversational narrator of the story, are hyphenated Italians, the first generation born in Australia. Poppy, however, is from Melbourne's large Greek immigrant community, a first generation child, too.

Pepe and Poppy meet and fall in love. Today, that would be less of an event. However, in the early 1980s, where the book is set, this is akin to a tragedy for the two lovers' families. Pepe's family's biggest worries are: Are they Catholic? Can she make pasta, pizza, lasagna? Can she prepare Italian coffee? What language and culture will the children learn? Would she be able to understand us?

The author has his narrator not only tell the story, but explain to the reader the "realities" of being a Italian-Australian. As the story progresses, the narrator lets us into what he learned from the events he relates in the book, about how similar Italian and Greek-Australians can be.

Let me just add a comment about Australian English for any non-Australian readers, and about the tone of this novel: it can be a bit vulgar and crude, but it is rich with humor and a zest for life. Some Aussie words might be unfamiliar, such as relos for relations, and bog-catcher for underpants, and chooks for chickens, but all the words are understandable in context. There is also the frequent use of the word wog, a racially derogatory term that in Australia has been appropriated by those against whom it was used, to refer to themselves as a group.

Pepe & Poppy is rich with humor, especially concerning the eccentricities of the families. There are plenty of off-hand observations about Italians, like these: ...there's nothing scarier than silent Italians; it's unnatural., Italians love emotional people. If you're reserved you either have something to hide or you're just plain stupid.

The cultural references from the early eighties are fun, too; lots of nostalgia. Pepe & Poppy has a cinematic structure, making it easy to imagine the book as a film. It would make a colorful, goofy, romantic, nostalgic film.

In the end, Pepe & Poppy is a funny story about a cultural melting-pot. In the background of the story is the suggestion that today's Australia is home to better-acculturated hyphenated Greeks and Italians, and that the Australian society is more appreciative of the best of Greek and Italian culture.

Pepe & Poppy is well-written, well-constructed, well-edited, and very entertaining. It transports you to another world, immerses you in it, and leaves you feeling better for it, in the end. You can feel lots of love behind the words. It is a love-story for Pepe and Poppy, but it is a coming-of-age story for Pepe's brother, Charlie.

You have subscribed to alerts for Joe Novella.

You have been added to Joe Novella's favorite list.

You can also sign-up to receive email notifications whenever Joe Novella releases a new book.