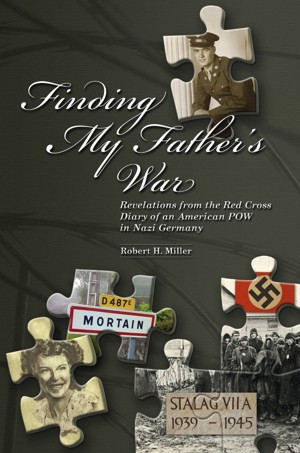 By Robert Miller
“This is the remarkable story of my father, Herbert Henry Miller, who was drafted into the army in August 1942.” So begins this book about an ordinary man thrust into extraordinary circumstances during World War II. The writer is Herbert Miller’s son, Robert, who discovered his father’s Red Cross war diary at the back of a drawer in the weeks following his 1994 death.

Robert H. Miller spent three years researching and writing the story of his father's experiences as a POW in World War II. An automotive lighting and advanced technology designer for the past fifteen years, Miller travels to Europe frequently where he has been under exclusive contract to 3M USA and Germany since 2006. He has taken advantage of his time in Europe to research this book. Miller has been a professional photographer for thirty-five years and is the winner of several international awards. He lives in Canton, Michigan, with his wife, Colleen, and their fifteen-year-old son, Patrick. He and Colleen also have four grown children.

You have subscribed to alerts for Robert Miller.

You have been added to Robert Miller's favorite list.

You can also sign-up to receive email notifications whenever Robert Miller releases a new book.