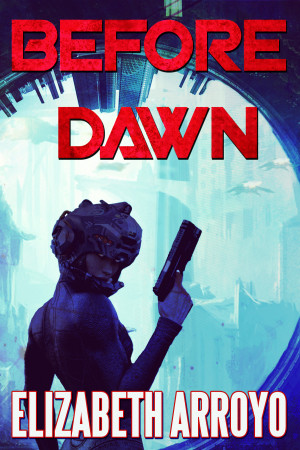 By Elizabeth Arroyo
Rated 3.00/5 based on 1 reviews
In a world infected by violent hybrids, survival comes with its own set of rules. Sixteen-year-old Zoe is an expert at breaking them.

Zoe has abilities she can't explain. Just getting through another day without being killed is a challenge. She survived since her mother’s murder with help from Morph, an elite soldier. As mysteries unfold, Zoe needs to find out if he is her friend - or foe. More
Survival rule number one: eat before being hunted.

In a world infected by violent hybrids, survival comes with its own set of rules. Sixteen-year-old Zoe is an expert at breaking them.

While Zoe has abilities she cannot explain, just getting through another day without being killed is a challenge. She has survived since her mother’s murder with help from an unexpected ally, Morph.

Morph is part of the Arcane, an elite force of teenagers from an Alliance of space stations. After the Arcane are destroyed in an explosion, only Morph and his brother survive. They are sent on a new mission to capture a dangerous hybrid.

Morph is torn between duty and his attraction to Zoe. With threats to the planet from above, Morph knows Zoe’s chances are limited. Trying to save her could be a betrayal to the Alliance.

When Zoe recovers memories of her mother’s death that point straight to the Arcane, she realizes Morph might be the real enemy.
As more mysteries are brought to light, telling friends from foes becomes difficult. For Morph and Zoe, the world is more dangerous than ever. And trusting each other is the key to them living to see another day.

I received a copy of this book, with thanks, from Xpresso Book Tours in return for an honest review. My opinions are my own and are not influenced by this.

This book did not live up to its potential. There was a lot going on and I couldn't grasp even half of it.
I'm so flustered by the confusion I don't even know where to start.

It feels like you've missed the 1st book or a prequel the way it starts out. There's a lot of explaining that slipped past my attention, overwhelming enough for me to not be bothered as to whether there were even any plot holes. There were many instances where characters did not exhibit any emotional reactions where it was needed. And many others where I was surprised and confused by the MCs contradicting reaction, where I went 'Wait. I thought he/she was the enemy?! Why are you trusting them all of a sudden??' or vice versa. They kept oscillating between a character being the enemy and the friend, back and forth, back and forth, so much so that I gave up on trying to figure where they stood on my own.

There's attraction between the two MCs but they never come to trust each other throughout the ENTIRE novel. On top of that, Zoe is thrown in with two other guys where we're not sure if there's supposed to be 'something'.

Overall, this book could do with another revision or two to bring it up to its potential. Which is just another YA sci-fi/dystopian story without much to make it stand out from the crowd. It wasn't that bad, certain aspects held promise, but the flaws mentioned greatly reduced the reading experience. I have hope the author can do better

You have subscribed to alerts for Elizabeth Arroyo.

You have been added to Elizabeth Arroyo's favorite list.

You can also sign-up to receive email notifications whenever Elizabeth Arroyo releases a new book.