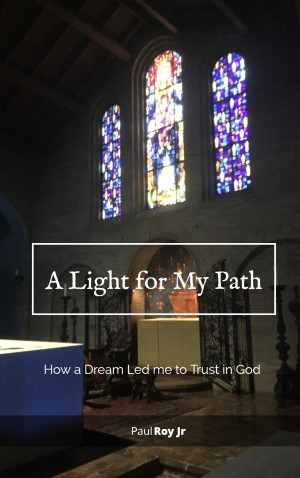 A Light for My Path

By Paul Roy, Jr
How I came to trust in God enabling me to change my life. A Catholic's story of how I came back to the faith. More
A story of how a dream turned my life around. I went from a life of depression and financial problems. I was jobless, behind in my mortgage, barely able put food on the table and my house falling down around me.

I was a believer in Christ, but it wasn't until He kept sending me a message through a recurring dream I finally realized what He was trying to say. Getting that message saved my life and brought me to better place.
Download: epub mobi (Kindle) pdf more Online Reader
lrf pdb txt
Price: Free! USD
Add to Library
Create Widget
Tags: faith in god spiritual help trust in god dream messages trust in jesus
About Paul Roy, Jr

A Cradle Catholic who fell away from the church in his twenties, Paul began to find his way back to God after a near-miss accident while working. At 55 this caused him to rethink his life and what exactly his purpose is. He currently works for a human service agency, is married to the woman that God sent him ten years ago and has two adult children and six wonderful grandchildren. He loves writing and you can read his two blogs, “The Wayward Catholic” and “Odds and Ends”. He is also working on his next project “A Grandfather’s Wisdom” a series of booklets describing the wisdom he would like to pass on to his grandchildren so they can avoid making the same mistakes he did.

Reviews of A Light for My Path by Paul Roy, Jr

You have subscribed to alerts for Paul Roy, Jr.

You have been added to Paul Roy, Jr's favorite list.

You can also sign-up to receive email notifications whenever Paul Roy, Jr releases a new book.