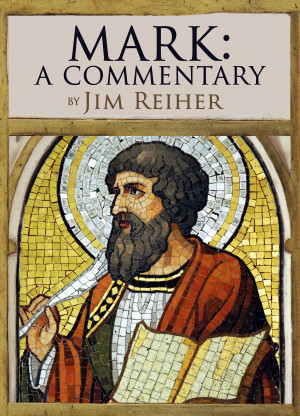 By Jim Reiher
Why another commentary on the Gospel of Mark? Well: if you are looking for an easy to read, yet solid and in-depth study of the stories and teachings of Jesus, then this is it. This commentary on Mark is a practical, devotional and relevant contribution to the theme of "discipleship". It will challenge and disturb you, inspire and enlighten you. More
This commentary on the Gospel of Mark has a unique flavor. This comes from the fact that it is a layperson's commentary, written with scholarship that is 'hidden' in a conversational style. It is a devotional, reflective discussion about the Gospel of Mark. It will ruffle your feathers in places, as it asks the hard questions that one feels compelled to ask as you read the words of Jesus and reflect on his actions as well. Jim Reiher seeks to be honest and open as he reflects on each story and teaching in this Gospel. There have been a lot of books written on Mark, but this one, from an Australian Biblical scholar with a devotional emphasis, will prove to be most popular with those who use it. This book will be great for small study groups as well: the "Food for Thought" reflections after each main story or teaching block, bring the gospel into our own culture and times and cause us to ponder on how it can be applied in our context.

Jim Reiher lives in Melbourne Australia. He has four adult children and lots of grandchildren. Jim writes both fiction and non-fiction.

Regarding his fiction and the themes he loves to write about: Over his lifetime, (besides holding down "real jobs") Jim has been a clown and a magician. His clown character was the hobo "Splinter" - a bungling clown who tried to do magic and usually either failed or surprised himself. And Jim's straight magic routine was, and still is, performed for both adults or children. Whether an all adult function, or a children's party, his comical magic causes everyone to laugh and wonder. His clown/magician side comes out in the novels: "The Sunburnt Circus"; and "Broken Hill Broken Lives"; as well as "The Gospel According to Splinter"; and "The Acts of the Apostles and Splinter". His non-fiction "Confessions of a Christian Magician" is light hearted and inspires you to pursue your gifts and passions.

Regarding most of his non-fiction, Jim's serious side comes out, although sometimes he writes his non-fiction with humor, too. Jim is a respected Australian Biblical scholar, with a MA in Theology with Honors, and 13 years of full time lecturing in Bible Colleges. Jim has published a number of books on topics ranging from Tarot Cards, to the Equality of Women in the Church, to how politics works in Australia. He has also written a number of commentaries on different New Testament books and letters: the Epistle of James, the Book of Acts, and most recently the Gospel of Mark.

Jim enjoys a nice quiet walk in 'the middle of no where'; a good movie; a good book; playing ten-pin bowling; and spending time with his children and grandchildren.

You have subscribed to alerts for Jim Reiher.

You have been added to Jim Reiher's favorite list.

You can also sign-up to receive email notifications whenever Jim Reiher releases a new book.