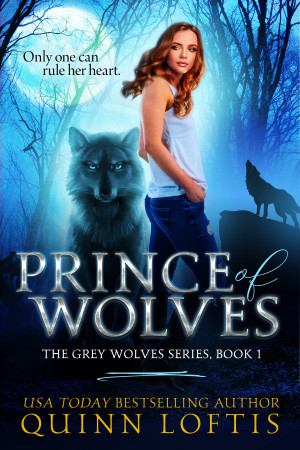 By Quinn Loftis
Rated 4.12/5 based on 25 reviews
Book 1 The Grey Wolves Series
Jaque Pierce, an ordinary 17-year-old girl, meets a mysterious foreign exchange student and soon learns he is a Canis lupus-a werewolf-with a destiny connected to her own. More
Jaque Pierce was an ordinary 17-year-old girl getting ready to start her senior year in high school in Coldspring, TX when a mysterious foreign exchange student from Romania moves in across the street. Jacque and her two best friends Sally and Jen don’t realize the last two weeks of their summer are going to get a lot more interesting. From the moment Jacque sets eyes on Fane, she feels an instant connection, a pull like a moth to a flame. Little does she know that the flame she is drawn too is actually a Canis Lupus, werewolf, and she just happens to be his mate, the other half of his soul. The problem is Fane is not the only wolf in Coldspring. Just as Fane and Jacque are getting to know each other, another wolf steps out to try and claim Jacque as his mate. Fane will now have to fight for the right to complete the mating bond, something that is his right by birth but is being denied him by a crazed Alpha. Will the love Fane has for Jacque be enough to give him the strength to defeat his enemy and will Jacque accept she is Fane’s mate and complete the bond between them?
Download: epub mobi (Kindle) pdf more Online Reader
lrf pdb txt
Price: Free! USD
Add to Library
Create Widget
Tags: romance paranormal werewolves teen romance
About Quinn Loftis

Quinn is an award winning author who lives in beautiful Western Arkansas with her husband, son, Nora the Doberman, Trixie the Shelty, and Chewy the Cat (who thinks she he is a dog). She is the author of 17 novels, and 2 Novella's including the USA Today bestseller, Fate and Fury. She also has co-written a book with her husband, Bo Loftis. Quinn is beyond thankful that she has been blessed to be able to write full time and hopes the readers know how much all of their support means to her. Some of her hobbies include reading, exercising, crochet, and spending time with family and friends. She gives all credit of her success to God because he gave her the creative spirit and vivid imagination it takes to write.

Reviews of Prince of Wolves, Book 1 The Grey Wolves Series by Quinn Loftis

Review
erwin game reviewed on March 4, 2022
(no rating)
Prince of Wolves is a series that tells about the complicated love relationship between a human girl and a werewolf. Of course, a love relationship like this will cause a variety of interesting conflicts.

This story had some potential. The writer could have done something different with the world and the characters. I still think it could have been edited and polished a lot more than it was. I don't care about a few grammatical errors, especially if they're just typos. Those don't usually make the story harder to read.

However, in this case, the technical flaws actually did make this fairly straightforward story harder to read that it should have been, and that's an issue.

I would also like to tell something to all werewolf writers: there is no rule that says that werewolves have to mate for life and be creepily bonded to people that they barely know and only love on a bizarre pseudo-biological chemical level.

Really. I feel like every werewolf story written in the last ten years seems to operate under that assumption. It's as if the writers think that this is as fundamental to werewolf stories as the transformation part. It isn't.

This story honestly doesn't have much to it other than that trope, and that's a big problem.

The strong macho jerk and the insecure girl who barely know each other and become obsessed with each other anyway can't have compelling conversations. They don't know each other well enough for that and they don't have enough in common for that. In a dialogue-heavy romance story, this just means that they're going to gush about each other a lot.

I like romance, but if all it does is affirm macho, sexist values, it's actively bad.

The idea that you will die when your partner dies is horrifying, not romantic. Even if you love your partner, living in fear that they will die and take you with them would poison the relationship. The fact that some people actually make this wish fulfillment is a huge problem.

Werewolf stories don't have to be like this, and I have no idea why people think that they should.

So... I really enjoyed the witty, sarcastic comebacks from the girls because I am from the South and they just made sense. Also, they are sayings I would expect to hear spouting from the mouths my own teens. I enjoyed the storyline though it is a little overused and the content didn't really have anything new to offer.
That being said, the lovey-dovey, I'll love you until the end of time, have my baby even though I just met you three days ago...(not really, but you get what I'm saying) was a little hard to swallow. There was very little build up before the climatic fight for your life scenario and then it just kind of fizzled from there. The potential is definitely there, but it just didn't land in the bullseye, yet.
I'm a very critical reader and the grammatical errors were slightly distracting as well. With a good proofread and some tweaks in the he said, she told, he asked type conversations, this could be a 4.5+ rating. As it stands and as I can't give half stars, I'll have to rate this a 3 for meh, I can take it or leave it.

This book is such a fun book to read, it really pulled you in and I felt like I was there having fun with all of them. It was like they were your best friends and you knew them your whole life. Jaque and her two side kicks had be laughing from beginning to end! :D

I guess I am not the target group of this book, since I am an adult.
This is like the sugarfloss version of twilight without vampires.
Nice is the good friendship between Jacque, Sen and Sally. I am not sure if it good to talk about "realistic" in a book about werewolves, but what I missed is a bit friction between the characters.
Only understanding and friendship between the "good ones" the only one which are causing trouble are the "black hats".

Furthermore I didn't like the very conservitive image of the genders. Males are volatile, want to protect the females and the females have to moderate the male temper. Oh myyy... back to the 50ies!
Also the image of sex and marriage: It is good that sex is portrayed as something which shouldn't be done lightly.
But is it ok to bind yourself for centuries, when you are 17? In this book it is ok to do so provided you are married.
So only 2 stars from me. However if you are looking for fantasy for conservative girls you will haev fun.
P.S.: Never ever ride a motorcycle in flip flops!

This book has characters you'll fall in love with from the start and the humour and storyline create a book that will make you laugh out loud, you won't want to put it down. If you are planing on reading this series I would strongly recommend it, I have read this series and the spin off series multiple times and enjoy them just as much each time. One of my favourite authors :)

Like, no offense, but have you gone to school? Or considered getting an editor?

This novel takes you on a very intense and wild ride. Loftis brings this story forward with her fun loving writing style that draws you in. Although this is in essence a supernatural novel Loftis makes it easy to relate to and visualise. I also appreciate how she defines her version of werewolf without stepping out of her story proper. All of the background information is worked into the action and reaction of the story itself.

Loftis has created a cast of very approachable characters. It was very unique watching the 2 main characters coming from such different backgrounds trying to work together and become one. The switching of perspectives between the two main characters allows you to know them both intimately. I also appreciate how Fane’s Romanian tongue and culture make their way into the story and how Loftis ensures all is clear without breaking the forward flow of the story. The supporting cast in this novel was priceless. I absolutely loved the best friends. The dialogue was also absolutely priceless. It was perfect. It helped all of the characters become much more authentic and real.

Overall? I read the entire novel in a single sitting. If my TBR pile weren’t a mile high I would have dove right into the next novel in the series. This novel doesn’t quite end in a cliffhanger but it’s a very open ending that leaves you wanting more.

Please note that I received this novel free of charge from the author in exchange for an honest review.

One of my favorite series!

You have subscribed to alerts for Quinn Loftis.

You have been added to Quinn Loftis's favorite list.

You can also sign-up to receive email notifications whenever Quinn Loftis releases a new book.