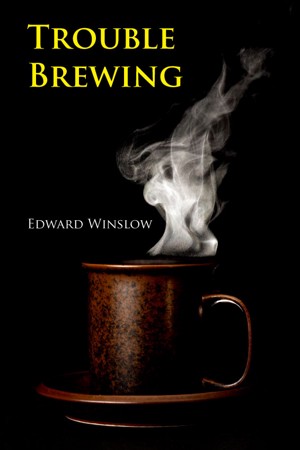 Rated 4.50/5 based on 4 reviews
Dave's no superhero, even if he does have a very unusual talent. But when a major New Zealand crime lord comes looking for two million dollars that Dave's wife embezzled, he needs to learn to act like one.
Download: epub mobi (Kindle) pdf more Online Reader
rtf lrf pdb txt
Price: Free! USD
Add to Library
Create Widget
Tags: crime superhero new zealand
About Edward Winslow

Edward spent ten years working as a stage manager and lighting designer. When he found that this wasn't sufficient to crush his spirit he decided to switch to writing instead.

I love superhero stories be they text, movie, or graphic novel. Trouble Brewing has a super-powered character with an interesting superpower that makes the title a clever pun. But superpowers aside, this really is a caper story. From a technical perspective the writing is good with proper sentence construction and very few typos. This is a polished story, but the problem is with the plot. A caper story requires a tight plot filled with complications. At the midpoint there is a heist that goes far too easily. A second caper at the end of the story doesn't go as smoothly but why it did was unsatisfying. The main character, the one with the superpower, is not very interesting. He's kind of a sad sack who follows the lead of the secondary characters. Although they are more interesting, I was more than a little perplexed by their motivations to get involved in this caper. I didn't buy the explanation given. I found the story resolution a little too pat and unrewarding.

There is some good stuff in this book, and it was a quick read. Some parts did entertain me, but if there was tighter plot and slightly different characters I would have enjoyed this much more.

absolutely thoroughly enjoyed this book from the first page. Started reading it Sunday afternoon - tea was late cause i didn't want to put it down. Just finished it tonight. Connected with characters straight away, enjoyed all 3, David, Liza and Jean. Please write more books Mr Winslow :)

(review of free book)
Persephone Love reviewed on Jan. 6, 2012
(no rating)
This was such a refreshing read because as serious as it could be, it was a really lighthearted story. Dave is the protagonist and he really doesn’t have much of a backbone but he does grows into it later in the book. Dave is just down on his luck and appears to be a really miserable man because of his current situation. He works at a job he hates and not only did his wife, Belinda, pulled a Ponzi scheme but the people she ripped off are looking for their money back. They want it from Belinda or Dave one way or another.

I really like the supporting characters. Jean was hilarious with his flamboyant personality. Liza was rough around the edges but she was really cool. She completely decided to help out Dave and all he did for her was helped her gather her stuff from her ex-girlfriend’s place. She was somewhat of a selfless character and the brains of the operation to gain two million dollars. The plan is to steal a diamond necklace worth that much money. (I would have never about that, I think I would have rob a casino or a bank. Where else am I going to get two million dollars). The way he robs the necklace is pretty sweet.

I thought the power to heat up and cool down tea as a power was a little lame that it was funny. “I’m a superhero but I can only work with tea.” Umm, okay. Winslow showed that Dave could be badass using tea only, he totally prove that controlling tea is not a lame power but very useful.

My one problem with this book is the second diamond heist. The first diamond heist is committed by Dave in order to pay off the two million dollars. The second diamond heist is committed by Dave (again) because he doesn’t want Crowley to use the diamond he (Dave) stole to seal a deal with another major criminal. For a guy with no backbone, he is sure hell bent on retrieving that diamond. I’ll suspend disbelief in this area for now but man, it’s a 180 degrees from the weakling Dave was.

Overall, it was a funny contemporary story about a guy who uses his tea heating ability to steal a diamond necklace.

I really enjoyed reading this. Like other review, weird but interesting.

This one is a little on the weird side but and interesting and fun read. I enjoyed it.

You have subscribed to Smashwords Alerts new release notifications for Edward Winslow.

You have been added to Edward Winslow's favorite list.

You can also sign-up to receive email notifications whenever Edward Winslow releases a new book.