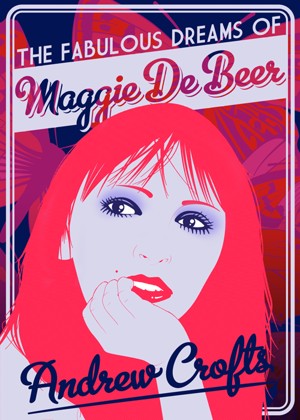 Fifteen year-old Maggie arrives in London on the run from her humdrum suburban life, determined to make it big in show business.

For more than thirty years she is exploited by both men and the media. She struggles against endless set-backs and disappointments, always remaining optimistic, always believing that this time her big break has come... More
Starting in 1970 Maggie de Beer’s journey mirrors the rise of celebrity culture and the growth of the media which ruthlessly created it, exploiting and destroying the lives of girls like Maggie who willingly offered themselves up, happy to make any amount of personal sacrifices in exchange for a chance to live the dream. She is determined to make herself “interesting” and only when she finally achieves her goal, at enormous personal cost, does she discover, under the full glare of the media spotlight, that the family she was running away from was never as humdrum as she had believed.

“This, I thought as the chauffeured car slid me back from Park Lane to Earls Court behind darkened windows, is what life must have been like for party girls like Christine Keeler in the sixties. I had found my Xanadu, the place where I was meant to be …”

Andrew Crofts has published more than eighty books over forty years as an author and ghostwriter, many of which have become international number one best sellers. His subject matter and co-authors have ranged from billionaires to bonded laborers, reality television stars to the rulers of medium sized countries, rock stars to bar girls. He is also a travel writer, a business writer and a published novelist.

His book “Ghostwriting” was quoted extensively by bestselling thriller writer, Robert Harris, in his recent book “The Ghost”, which Roman Polanski subsequently filmed with Ewan McGregor playing the ghost writer of the title.

Two of his latest titles are "The Overnight Fame of Steffi McBride" (Blake Publishing), the fictional memoir of a young soap star, and "The Change Agent - How to Create a Wonderful World", (Tonto Books), a biography of James Martin, the futurologist and biggest ever private donor to Oxford University.

"Andrew Crofts is one of British literature's best kept secrets" - Matt Allwright, The One Show BBC1. –

You have subscribed to alerts for Andrew Crofts.

You have been added to Andrew Crofts's favorite list.

You can also sign-up to receive email notifications whenever Andrew Crofts releases a new book.