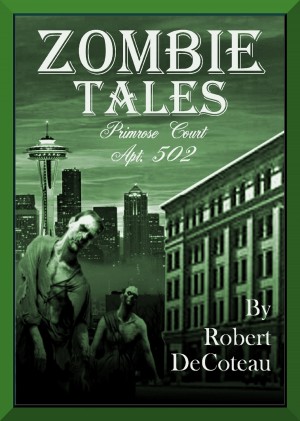 Rated 4.60/5 based on 5 reviews
Tommy's whole world is falling apart around him. It is the worst day of his life, but it is about to get much worse.

I was born in 1974 in Bremerton, Washington. I moved to Bellingham, Washington at the age of four and have been here ever since.
I love living in the Pacific Northwest about two months out of the year. The other ten months it rains.
Constant rain gives me plenty of time to read and write. While I'm hooked on writing horror right now, I enjoy many other genres.
My favorite author is Robin Hobb, who also lives in the northwest. She is the award winning Fantasy author of Assassin's Apprentice and several sequels.
I have one son. I named him Chance. He is currently six going on fifteen. We are both currently enrolled in school, but I am a few grades ahead of him.

I liked the way it is the start of a zombie apocalypse. Not always nice people, btu you want to know what happens.

An enjoyable short story; a jagged slice from a bigger picture of a world going to pot (sic).

Taken from my blog: nicolestorey.wordpress.com

Happy Wednesday! Today is a first, as I am reviewing three books at one time! LOL! Zombie Tales: Primrose Court Series is a collection of three short stories by author Robert DeCoteau. All three stories were based on Decoteau’s novel Don of the Living Dead. I have yet to read this novel, but I must say that I enjoyed all of the Primrose Court “shorts!”

In the first book, Primrose Court Apt. 205, we read about Theodore Granger – a man who suffers from Agoraphobia and OCD, has an irrational fear that he is cursed, and that his presence has caused many deaths. In the story, Theodore has decided he is going to take his first step out into the world after ten years of being a recluse. It is an important day for him! He only has to walk one block and cross the street to get to the coffee house where he is supposed to meet his doctor. Unfortunately, there are more deaths along the way.

In the second book, Primrose Court Apt. 305, we read about Charles Grimly and his wife, Mariana. Charles definitely has a “Norman Bates” complex, as he, too, cannot let go of his mother’s apron strings. His wife is a stripper at a local club and Charles has a problem with this. He is an over-weight guy who lives with a a woman who cannot stand the sight of him and treats him like dirt. As I read the story, I often wondered why Mariana married Charles if she despised him so. Everyone has a breaking point and Charles finally reaches his. With the help of his dead mother, it looks like Charles may be onto a better life – minus his pushy wife. However, even the best laid plans go awry. There are some things which cannot be foreseen – he is about to find that out.

In the last book, Primrose Court Apt. 502, we learn Tommy’s story. I actually felt sorry for this young man. He is a druggie who lives with his mother who suffers from Alzheimer’s. He has just lost his job and learned that his girlfriend is sleeping with his drug dealer. Figuring that things can’t get much worse, Tommy goes out the window and sits on the building’s ledge, contemplating his life and if maybe suicide is the answer for him. Then, something happens that assures him there are things much worse than death.

I loved several things about these short stories, but my favorite is how all the characters are tied together (they all live in the same apartment building) and make appearances in each other’s tales. I am often displeased with short stories because there isn’t enough time to get to know the characters and relate to them on a personal level. Decoteau gives just enough information for the reader to understand the protagonist, their problems, and why they take the steps they do to resolve them. I do hope that maybe the author will take these characters and go a bit farther with their adventures. I would love to know what happens next!

This story was from the viewpoint of 23 year old Tommy. His life is totally screwed., so he's sitting on the ledge contemplating his situation.

In Zombie Tales: Primrose Court Apt. 502, Decoteau offers a refreshing approach to zombie fiction with interesting, believeable, well-developed characters, a strong narrative voice, and a clever storyline that is an engaging, quirky, and enjoyable page-turner. As part of a linked and larger tale, Apt. 502 introduces Tommy, who is most definitely having a very bad day, and also provides glimpses into the lives of the other denizens of Primrose Court - each fascinating in turn, each of whom just might end up also having a very interesting day. For fans of the undead and the zombie genre, Primrose Court Apt. 502 is well worth the read.

You have subscribed to alerts for Robert Decoteau.

You have been added to Robert Decoteau's favorite list.

You can also sign-up to receive email notifications whenever Robert Decoteau releases a new book.