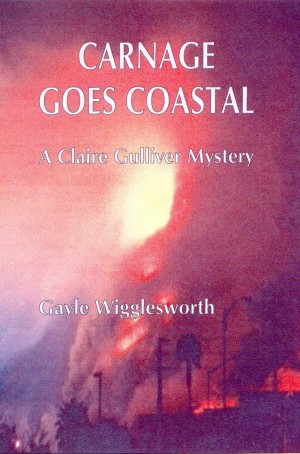 By Gayle Wigglesworth
When Karen Rallins finally realizes someone is trying to kill her she only wants to run away and find a safe haven. She doesn’t know what to do, so she calls her father for advice. As usual her father isn’t available but this time the voice on the phone offers help. And because she is terrified and desperate, she gratefully accepts. More
It’s a tired old story of a single working girl, who foolishly becomes pregnant only to find her beloved partner rejects her and disappears from her life. But in this story that’s where the situation takes a turn for the worse. What is it about this particular story and this particular girl which motivates someone to murder her?
When Karen Rallins finds herself playing the female lead in this terrifying drama, she immediately takes action to protect herself and her unborn child.
She has been living in New York City since graduating from college and had prided herself on her city smarts, only now to realize she has been hopelessly naïve. At first she was only furious, at herself for her stupidity, and at her boyfriend for his duplicity.
Now she is truly terrified. She realizes she has to get out of the City. She needs to find a sanctuary. Desperate, she calls her father, but when has he ever around when she needs him? However, this time when she calls, instead of her father a woman answers, and she offers hope…
Available ebook formats: epub mobi pdf rtf lrf pdb txt html
First 20% Sample: epub mobi (Kindle) lrf more Online Reader
pdb
Price: $5.99 USD
Buy Add to Library Give as a Gift
How gifting works
Create Widget
Tags: amateur sleuthtargeted by assassins pregnant woman pursued running for your life
About Gayle Wigglesworth

Gayle has always been torn between her skills at organization and management and the creative arts. As a young woman she moved to San Francisco on what she considered her life’s adventure. And while she took a job in the banking community to support herself, she really wanted to write mystery novels. Unfortunately, while living alone in a “big” city and typing her novel in the late hours of the night, she frightened herself with her plot line and had to pack it away. In fact, she no longer would even read her beloved mysteries; it was way too scary. So instead of writing she concentrated all her energies on her career, eventually rising to the level of a Senior Vice President.

She continued to pursue her creative side by continuing art courses and she became an accomplished potter producing unique pottery, both on the wheel and by hand. Eventually, the children grown and living on their own, Gayle returned to her mysteries and to her writing.

Gayle lived her whole life in California so when her company was sold and she found herself in the latter years looking for a job it was a shock to realize she may have to relocate. She accepted a position in Houston, but her husband assured her they would regard it as a “foreign assignment” and they could move back to the San Francisco Bay Area when she was ready to retire. Little did they know that they would love Houston Texas where they now live. However, with all their family and friends back it California it was difficult to continue the traditional family get-togethers they habitually hosted. Her children whined, “Who’s gonna cook?” and called at all times of the day and night for recipes and instructions, which inspired Gayle to write “the book.”

Gayle’s Legacy, Recipes, Hints and Stories Culled from a Lifelong Relationship with Food makes it possible for the traditions to continue, albeit, with other people now hosting the meals. This cookbook is more than a collection of recipes, it’s a “how to” book. This book, including detailed steps for creating the family’s favorite recipes while entertainingly telling family history through the vignettes and photographs, was published in 2003.

When the company Gayle worked with in Texas was sold, she decided there was a message to her in that. Instead of taking another position she elected to retire early and concentrate on her writing. She was determined to write and publish a mystery.

Because Gayle and her husband love to travel and have done so extensively, she followed the advice of the experts, “write what you know.” Gayle developed a concept for a mystery series where the protagonist, Claire Gulliver, a librarian-turned-travel-bookshop-owner is a nice person who, somehow while traveling, becomes embroiled in situations that are not nice; in fact, sometimes these situations are downright terrifying.

Currently five Claire Gulliver Mysteries have been published. Gayle is currently finishing the sixth which is due out at the end of 2010. Meanwhile she finished a stand a long mystery, Mud to Ashes, which was published in 2009. She is working on another series, called Glenda at Large.

Gayle spends her time writing, potting, reading, traveling and cooking. You can see her at many of the mystery book conferences promoting her mysteries, occasionally she will conduct a cooking class to promote her cookbook, conduct a workshop to help people learn to write their own family history/cookbook and once in a while she will do some contract consulting in the banking world. She is a member of Sisters in Crime and Mystery Writers of America.

You have subscribed to Smashwords Alerts new release notifications for Gayle Wigglesworth.

You have been added to Gayle Wigglesworth's favorite list.

You can also sign-up to receive email notifications whenever Gayle Wigglesworth releases a new book.