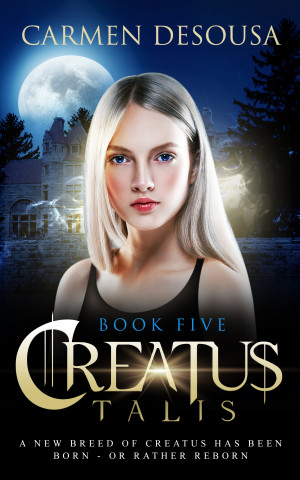 By Carmen DeSousa
Rated 3.00/5 based on 1 review
Vev, one of the first generations of creatus talis, finds herself torn between her younger family members and a forbidden love as she fights to save the young talis from being turned into a weapon — or worse, annihilation. More
For four thousand years, creatus elders have insisted that the creatus population concealed themselves from human beings because humans had hunted the creatus almost to extinction…

But one woman’s research reveals that when creatus first arrived on this planet, humans didn’t fear the alien beings that looked so much like the human race. That is, until the creatus started to breed with humans, creating a ferocious killer feared by humans and creatus alike. A creature so fierce that its legacy of death and destruction has fed nightmares for millennia. And now, a new breed of creatus has been born — or rather, reborn.

Vev, one of the first generations of creatus talis, finds herself torn between her younger family members and a forbidden love as she fights to save the young talis from being turned into a weapon — or worse, annihilation.
Available ebook formats: epub
Price: $3.99 USD
Buy Add to Library Give as a Gift
How gifting works
Create Widget
Tags: urban fantasy paranormal romance legends supernatural thriller supernatural suspense vampire romance myths romantic fantasy creatus

About the Series: Creatus

For four thousand years, creatus have concealed themselves from the humans who hunted them almost to extinction. Unwittingly, one creatus will endanger them all ...

Spoilers ahead.
I anxiously anticipated this book after reading the series starter. Personally I don't consume paranormal content that includes, magic, vampires and warewolves, but I do read alien content. In the first book the Creatus were revealed to be aliens. Fast forward all the way to Book five and it becomes a full on vampire novel, blood consumption and all. I was personally disappointed by this, after the series starter rubbished typical vampire lore, only for Book five to go there anyway, all via another route. To be fair, the preview states that legends of heroes and monsters originated with the Creatus, but that did not temper my disappointment.
Other comments. The grammar was good, I spotted no mistakes on that front. The plot basically got me up to speed with the main events of the three books in between that I skipped (all due to my own impatience). The good thing about that is now I actually want to return to the previous books and read Jonas' story.
Critisims. The main villain came across as cheesy instead as menacing. I didn't get a serious sense of horror from the women held captive for egg harvesting or the room full of incubators where the new breed was being cooked up. The writing didn't convey the inhumanity of those two pivotal revelations.

You have subscribed to alerts for Carmen DeSousa.

You have been added to Carmen DeSousa's favorite list.

You can also sign-up to receive email notifications whenever Carmen DeSousa releases a new book.