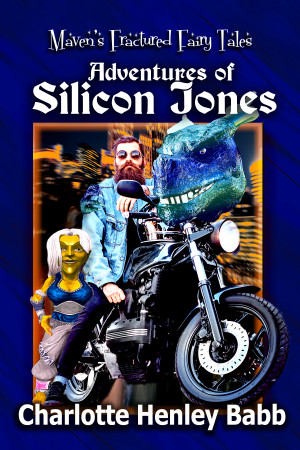 The CIty of Gold: Brewster wants to escape both his present and his past, but the people in the next booth send him on a long flashback.

Adventures in Dragonsitting: When faced with being the afternoon snack for three baby dragons, Jones uses his con-man skills to keep the tykes distracted until he can find a way to escape.

Seven Deadly Dwarfs: After rejection by his fairy godmother true love, Jones makes do with his mundane girlfriend who has plans to keep him with her forever, but he escapes to a different kind of servitude with benefits.

Jones is a lovable rogue whose heart is always in the right place even if his body isn't. Able to travel across dimensions, he often finds that his escape is more challenging than where he is escaping from.

Silicon Jones is a departure, but only a little from her Maven the Fairy Godmother books. The world setting is the same, but Jones is only a visitor rather than a resident of the Fae world.

I recommend reading it to anyone following the Maven books. While it's an outlier, it is still set in Charlotte's wacky and fun concept of the world of fairy and godmothers. I find them all delightful, but I'd rather read about Maven than Mr. Jones.

The three little dragons were hilarious. I enjoyed that story of the three the most. Now a spinoff of the kid dragons would be a great direction to take into the Fae world. Maybe Maven has to grant a wish to the triplets. Now that'd be a book I'd definitely read.

Note that 4 stars is "I liked it" not a slam in the slightest. It just didn't fill my cup of tea as well as Maven does.

You have subscribed to alerts for Charlotte Henley Babb.