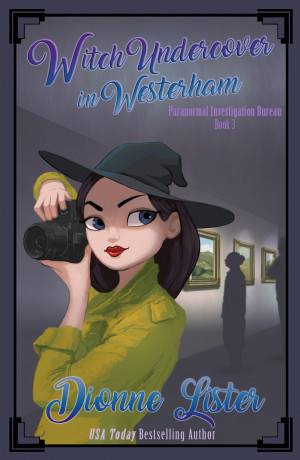 She also gets a not-so-nice surprise when a man wanting revenge for his brother's death comes for her.

Lily and new friend, Olivia, find out that their art teacher, Mrs. Valentine is missing. First of all, she left class for a family emergency. Her fox, yes, a real fox goes with her. On their way to dinner, the group (Lily, Angelica, William, his sister, Sarah, and Beren) literally run into the fox on the road. Lily knows this can’t be a coincidence and soon enough there’s an investigation. Only, their investigation must be done carefully. It’s important that Lily’s special power is not revealed just yet especially to the head of the PIB.
As if that isn’t enough, the brother of a man who had tried to kill Lily previously, but was killed in the process, tries to kill Lily. She must learn a lot about self-defense in the normal way and in the witchy way as well and how to go on the offense in a big hurry.
If that isn’t bad enough, Will’s ex shows up to harass Lily and find out more about her and her ties with the PIB.
This third book in the series brings Lily into more danger and her emotions are scattered. It seems that she may have more abilities than anyone thought, but that may be a guess on my part. It should be interesting to find out as the series progresses and Lily and James continue to look into their parent’s disappearance.