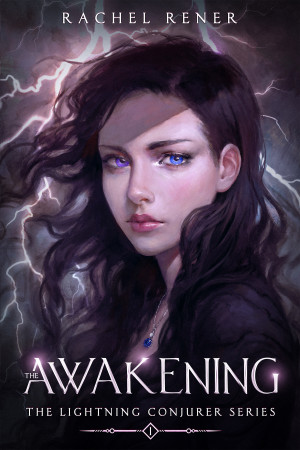 The Lightning Conjurer: The Awakening

When Aspen audits a college class for a much-needed dose of normalcy, she’s shocked by the assistant professor’s cold disdain for her, and her alone. Their heated confrontation turns a corner when Aspen panics, accidentally shattering every bulb in the classroom. That’s when Aiden realizes what she is... but he's not the only one who’s been paying attention.

In her mission to discover who – and what – she is, Aspen must learn to control her powers, navigate her budding feelings for this new and mysterious ally, and, finally, unearth the shocking truth about her past.
​​​​​​​*

"I absolutely could NOT put this down! Buy all three now, because once you start reading, you won’t be able to stop!" - ⭐⭐⭐⭐⭐ Amazon Review

"This is contemporary fantasy + magical realism at its finest. Thrilling, suspenseful, plus the perfect amount of romance!" - ⭐⭐⭐⭐⭐ Amazon Review

"I loved this trilogy more than The Hunger Games - and I read that series 5 times!" - ⭐⭐⭐⭐⭐ Amazon Review

Rachel Rener is the author of THE LIGHTNING CONJURER Series, a critically-acclaimed contemporary fantasy with elements of magical realism and romance. Her most recent release, THE GIRL WHO TALKS TO ASHES, was an Amazon #1 new release and a BBNYA (Book Bloggers&#39; Novel of the Year) semi-finalist.

She graduated from the University of Colorado after focusing on Psychology and Neuroscience. Since then, she has lived on three continents and has traveled to more than 40 countries.

When she&#39;s not engrossed in writing, Rachel enjoys painting, reading, rock shows (musical and mineralogical), Vulcanology (both the lava kind as well as the pointy-eared kind), and playing Diablo 3. She lives in Colorado along with her husband, a stellar mineral collection, and a feisty umbrella cockatoo (&quot;Jungle Chicken&quot;) that hangs out on her shoulder as she writes.

Find out more about Rachel and her books at www.TheLightningConjurer.com ⚡

About the Series: The Lightning Conjurer

In her mission to discover who – and what – she is, Aspen must learn to control her powers, navigate her budding feelings for the mysterious professor, Aiden, and unearth the startling secret about her past that no one wants her to figure out.
*

Also in Series: The Lightning Conjurer

Reviews of The Lightning Conjurer: The Awakening by Rachel Rener

The text was well written and engaging. The writing style was consistent, and the exposition didn't slow the plot overly much. There were a few typographical and grammar errors, but not enough to take me out of the moment. Great cover design and page layout.

Aspen woke up four years ago in a cabin in the woods with no memory of who she was, and only a strong desire to "stay under the radar, don't let them find you."

But when she starts manifesting crazy abilities, she doesn't have much choice but to follow the leads to the Asterian Order and find out what they're hiding.

This is a reread. I've read(and loved) the entire series, but wanted to go through them again in preparation for the release of book 4, The Reckoning. And, as always with rereads, going into it with a more, shall we say, aware perception makes it a whole new experience. This is a book of elemental magic(with science blended in) used in creative, exciting ways. The characters are real, making logical(and sometimes stupid) choices, and then living with the consequences. The world-within-our-world is well done, and I enjoyed all the suggestions of the REAL reason for historical events, like the Chicago Fire. Excellent weaving in of little details to bring the whole thing to life.

Overall, I (still) love this book, and I highly recommend it to anyone who likes urban fantasy, elemental magic, good worldbuilding, and interesting characters who grow.

through some of the reviews, I honestly am taken aback! I find it hard to understand how anyone would rate this book less than 4.5 or 5! I personally found the story very intriguing and interesting. I mean, what's not to like? A young woman, Aspen, finds herself alone in an abandoned cottage, with no memory of who she is or how she ended up there. She befriends her neighbour and tries to live off the grid as much as she can. Until one disastrous day, when a truck almost plows into her, strangely veering away at the last moment. So starts this thrilling tale which gets more exciting and interesting as the book progresses. There is a fair amount of mystery as the plot thickens as well as conspiracies. Aspen has to figure this all out, which she does, with an assistant professor. As they realise the extent of the lies and betrayal they discover even more pertinent information, setting a course for answers. It's a perfect ending for a start to a series and makes one eager to read the rest. Which I definitely will!

A slow start but worth some patience. It took me a while to get into the story and the characters but by the end of the first novel I'm dedicated to reading the other two in the series and checking out more by this author.

A fine read, captivating enough to hook me up for the next book in the series.
Aspen has no memories of her past, no ID, no real family. When her abilities suddenly awake, she is both terrified and curious - and wants answers. The more, the better. Who are her parents? How did she come to the extraordinary skills? And what kind of people are in the Order that is putting so much effort into recruiting her into their ranks? The more questions she has, the more determined she is to get the answers at any cost - and the more danger she founds herself in.
I really liked the premise of the book and the way the elemental powers system works, yet I suffered sometimes from feeling like being overwhelmed by cliches. With the powers, with the main plot twists, partially with the characters. There is certain charm on skill in the way how can one put the cliche on the pages, carefully distinguishing the stereotype as an illusion, putting it behind a veil of storytelling. This was mostly the case here as well, though there were parts where I really felt the stereotypes showing up, flattening the otherwise great reading experience. Nevertheless I did not lose any motivation to continue with Aspen & Aiden's story, and now that their ways are actually parting, it becomes all the more interesting.

Aspen has lived for the past three years without any form of ID or any memory of who she was. A kind neighbor helped her from time to time and she found a cash-paying job at the local diner, but since she didn't know the cause of her memory loss, she tried to stay off the grid. When she learned that she could audit courses at the local college (without any registration), she jumped at the chance, only to find that the assistant professor instantly hated her.

But that synopsis makes the story sound a bit too ordinary, if mysterious. Let's try again.

As Aspen was riding her motorcycle, she saw a semi coming her way and was immediately thrown out of its way by a tornado, although the weather had previously been calm. Back at home, she lowered herself into a cold bath, wishing the water was warm, only to find it heating up around her. Then when she had a confrontation with Aiden, the assistant professor, the light bulbs exploded around her. She soon realized, now with the help of Aiden, that she had remarkable powers - in fact, the extent of her powers hadn't been seen for thousands of years.

The magic system in The Lightning Conjurer series is elemental by nature. Some people are able to control fire, others water, still others wind, electricity, or earth. A few people have control over two or three elements, but that is uncommon. Aspen has all five. As the pacing of the story picks up and Aspen begins to uncover what may have been her past and is certainly her future, she is summoned by a powerful agency that promises to protect and train her. But they have their own secrets. Will she want to stay with them as those secrets come to life? Will she be able to leave if she chooses to?

Aspen and Aiden were fantastic characters, both with unrevealed pasts that impacted their responses to the world and to each other. Evelyn and Robert were delightful secondary characters. And the villain was believable, a woman willing to go to any length necessary for power. Although, I suspect we will find a much bigger baddie as the story continues. The romance worked, it built over time.

Content warning: There is one scene where a man climbs through a woman's window and begins taking off his clothes and forcing himself on her. It doesn't go very far, isn't what it seems, and is the only such scene in the book, but I felt the need to mention it because it did throw me off.

Overall, this was a fantastic story, with so many twists I did not see coming. I cannot believe this is Rachel's first book! The writing was so polished, it read like she had been doing this for years. I will definitely be finishing this series.

Admittedly, I (too) rarely find myself reading a truly considerable number of pages in a book in a single sitting. Also, I tend to lean towards the classics rather than new publications. This book by Ms Rener was an exception to the latter - and turned out to be an exception to the former as well.

Perfectly balancing description and action, the story was enticing from the get-go. (And the last 70-odd pages had me forget all about the world around me.) The author excels at summoning the desired atmosphere in just a couple of sentences, resulting in a smoothly flowing narrative. However, smoothly flowing as it is, it is by no means predictable. The story has credible and relatable characters, who sometimes make you laugh because of the entirely human way they talk and act, without resulting in flat-out comedy. Rarely have I shared every single attitude towards the characters presented with the main character. Masterfully done, in my humble opinion.

As a matter of fact, I will also be getting the printed edition, which I tend to only do for books that I really appreciate. Despite the categorization of "young adult" and "women's fiction", this not-so-young adult man is very much impressed - and eager to get his hands on the second and third volume of this trilogy.

You have subscribed to Smashwords Alerts new release notifications for Rachel Rener.

You have been added to Rachel Rener's favorite list.

You can also sign-up to receive email notifications whenever Rachel Rener releases a new book.