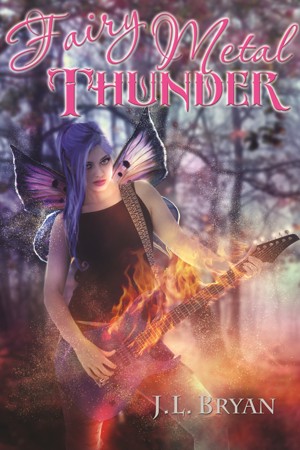 Jason plays guitar in a teenage garage band called the Assorted Zebras, but they have no fans, no gigs, and they're going nowhere.

Then Jason steals instruments from the fairy world, and soon the band is enchanting crowds, but their shortcut to success has made them enemies of Queen Mab of Faerie, who sends supernatural hunters to the human world to track them down. More
A rock & roll fairy tale.

Jason plays guitar in a teenage garage band called the Assorted Zebras, but they have no fans, no gigs, and they're going nowhere. Even worse, Jason has a crush on their lead singer, but she doesn't seem interested in him at all.

Then Jason steals instruments from the fairy world. Soon the band is enchanting crowds, and Jason is a step closer to the girl he likes, but the new gear is brimming with destructive magic they can't control.

Their shortcut to success has cost a troupe of innocent fairies their livelihood and turned Jason and his band into enemies of the powerful Queen Mab, who sends hunters to track them down, including one of the most dangerous creatures in Faerie...a small unicorn named Buttercake.
Download: epub mobi (Kindle) pdf more Online Reader
rtf lrf pdb txt
Price: Free! USD
Add to Library
Create Widget
Tags: adventure paranormal magic music fairy fae faery ya rock and roll
About JL Bryan

J.L. Bryan studied English literature at the University of Georgia and at Oxford, with a focus on English Renaissance and Romantic period literature. He also studied screenwriting at UCLA. He lives in Atlanta with his wife Christina and assorted pets.

(Source: I received a digital copy of this book for free on a read-to-review basis. Thanks to J. L. Bryan.)
All Jason wants to do is play guitar in his fairly mundane teenage band ‘The Assorted Zebras’, even if his parents would prefer he get a job or play his clarinet. But things are about to change for Jason and his band, when he catches a goblin stealing his mother’s earrings one night.

Following the goblin to the fairy realm, Jason notices some instruments that some fairy musicians have left unguarded, and taking his chances, he steals them and runs!
Back in the human world hours have passed, and Jason is in trouble for being out all night, but he soon comes to realise that it was worth it, when the fairy instruments turn out to be magical and enchanting.

With his entire band playing the magical fairy instruments The Assorted Zebras are a big hit, and suddenly they have thousands of fans and a big gig lined up. But the fairy queen knows that the instruments have been taken to the human realm and wants them back. Can Jason and his band really outwit the fae and keep the instruments for themselves?

I really enjoyed this book. It was just so light and fun and addictive! The story was nicely paced and easy to read, and flowed really well.
Jason was an average teen with the usual problems with parents and sisters and girls, and the rest of the band were also a fairly normal bunch. I loved the fairy instruments and how everyone responded to them, and there was just the right amount of magic and normality to make it believable. I also loved the assortment of fae in the book, including the gorgeous yellow and pink unicorn!
Some of the songs that the band performed where also pretty funny, including the one about ‘I stole a rhino for you’. I also thought the band name was pretty original!

Good start of a new series. Fresh and with a plot I've never seen before.

You have subscribed to alerts for JL Bryan.

You have been added to JL Bryan's favorite list.

You can also sign-up to receive email notifications whenever JL Bryan releases a new book.