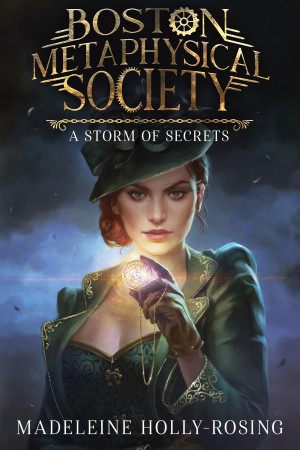 By Madeleine Holly-Rosing
Politics and power. Demons and spirits.

As the Great Houses jockey for power, an ex-Pinkerton detective, his well-born psychic wife, and her overbearing father must contend with treachery, subterfuge, and potentially a new demonic threat, in this political and supernatural thriller set in an alternate-history Boston of 1890.

This novel is a prequel to the graphic novel. More
Silver Medal Winner in the Feathered Quill Awards

Politics and power. Demons and spirits.

When ex-Pinkerton detective Samuel Hunter married Elizabeth Weldsmore, the heir to one of Boston’s Great Houses, he knew his life would change forever, but he never expected the return of Elizabeth’s psychic abilities.

Not only do they have to keep it a secret, but Elizabeth must learn quickly how to master them. For a psychic in a Great House is a political liability which her father, Jonathan Weldsmore, knows only too well.

As the Great Houses jockey for power, the three of them must contend with treachery, subterfuge, and potentially a new demonic threat, in this political and supernatural thriller set in an alternate-history Boston of 1890.

This novel is a prequel to the graphic novel, Boston Metaphysical Society: The Complete Series.

Her novel, Boston Metaphysical Society: A Storm of Secrets, won the Silver medal in the 2019 Feathered Quill Books Awards in the Scifi/Fantasy category and overall top pick.

Other comic projects include the short story, The Scout which is part of The 4th Monkey anthology, The Sanctuary (The Edgar Allan Poe Chronicles anthology), The Marriage Counselor (The Cthulhu is Hard to Spell anthology) and the upcoming The Airship Pirate (The Rum Row anthology), and The Birth (Stan Yak Vampire anthology).