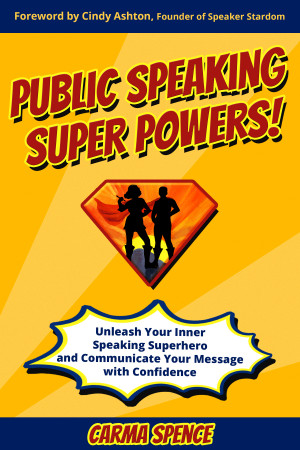 Author Carma Spence asked these questions of dozens and dozens of speakers and discovered the answer was, "Yes!"

Three out of every four people suffer from speech anxiety, and research suggests that people who don’t confront and overcome that fear are less successful in their careers and lives. However, people often look at successful speakers as superheroes with superpowers they, as mere mortals, could never possess.

Drawing from extensive research and interviews with business and professional speakers, Public Speaking Super Powers will show you how to:

* How to overcome the fear of speaking
* Develop the skills needed to be a success on the stage, such as storytelling and humor
* Master techniques like a superhero speaker, such as audience engagement, and using your voice, body language and eye contact effectively

and much more... There is even a bonus chapter on the business of speaking.

Price: $9.99
$4.00 USD
Buy with coupon Use the code AGB60 at checkout for 60% off during our site-wide promotion!
(Offer good through May 31, 2020 )
Have a better coupon?
Add to cart, then apply your coupon
Add to Library Give as a Gift
How gifting works
Create Widget
Tags: speaking communication public speaking presentations
About Carma Spence

Because she’s been there, she knows that you can be a decent speaker despite being introverted, shy and socially awkward.
Carma is fiercely committed to supporting her clients as they unleash their inner speaking superhero and boldly communicate their message with confidence. Her superpower is to help people see what is possible for them and guide them on the journey from where they are to where they want to be, Vanquishing the Mind Goblins of self-doubt and second-guessing that keep them stuck.
The speaking bug first bit Carma in High School while on the Speech Team. Her activities earned her several awards, a Letter in Speech, and a Degree of Honor with the National Speech & Debate Association.

After college, she joined Toastmasters and earned her Distinguished Toastmaster (DTM) award, the highest level of educational achievement in Toastmasters earned through a variety of speaking and leadership assignments.

People often comment on Carma’s strength and courage, but these qualities were hard won. In 2010, she left an emotionally abusive marriage, only to fall into another bad relationship. That one ended the night her boyfriend attacked her.

It was that fateful night that woke her up and got her to do the inner work she needed to do. After a year of counseling, training and studying Universal Laws, she met a good man who loves her as she is.

But the trials weren't over.

Just as they announced their wedding date, Carma was hit by a car while crossing the street, resulting in multiple broken bones.
It is the combination of all these experiences—both good and bad—that makes Carma a good mentor to those struggling with owning their gifts.

You have subscribed to alerts for Carma Spence.

You have been added to Carma Spence's favorite list.

You can also sign-up to receive email notifications whenever Carma Spence releases a new book.