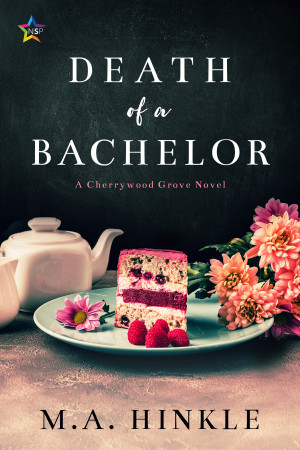 Death of a Bachelor

By M.A. Hinkle
Cathal's best friend is terminally ill and has asked him to look after her husband Damon when she's gone. There's just one problem: Cathal hates Damon. It'll take some weird food, a gender-bending Shakespeare production, and a five-foot tall T-rex cake to make Cathal realize he was wrong about Damon the whole time. But can he stop yelling long enough to tell Damon that? More
Cathal Kinnery is an arrogant, overeducated jerk, and Damon Eglamore is not afraid to tell him so. But Damon married Cathal’s best friend, so they have an uneasy truce. Then she passes away. Now they’re stuck together in close quarters, trying to honor her memory without shouting at each other all the time.

At first, they have no idea how to move forward. Damon is a chef, but all his favorite recipes remind him of his late wife. Cathal would love to start tomcatting around town again, except for that annoying promise he made to his best friend about looking after Damon.

Then Damon’s son comes to them for help, convinced the only way to win over his first crush is a gender-bending Shakespeare production. After that, Cathal talks Damon into taking up baking as a new way to use his talents. Next thing they know, they’ve begun a new life working as a team instead of jumping at each other’s throats. But can they trust each other long enough to make it last, or will they fall into old bad habits again?
Available ebook formats: epub
Price: $6.49 USD
Buy Add to Library Give as a Gift
How gifting works
Create Widget
Tags: romance family drama gay lgbt bisexual contemporary enemies to lovers
About M.A. Hinkle

M.A. Hinkle swears a lot and makes jokes at inappropriate times, so she writes about characters who do the same thing. She’s also worked as an editor and proofreader for the last eight years, critiquing everything from graduate school applications to romance novels.

Reviews of Death of a Bachelor by M.A. Hinkle

You have subscribed to alerts for M.A. Hinkle.

You have been added to M.A. Hinkle's favorite list.

You can also sign-up to receive email notifications whenever M.A. Hinkle releases a new book.