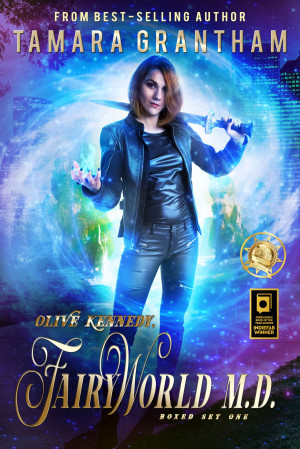 Two years before Olive encounters the Dreamthief, she’s working in Boston to create her mirror box, which she’ll use to diagnose her patients. But when she tests it, she’s transported to another place—an unknown world that is neither Earth nor Faythander. There she encounters some Wults returning from a hunting expedition on Earth—and Kull is among them. They are tracking a magical beast that has been stalking their people, and following them may mean Olive will return to earth—but if she does, she’ll lose all her memories…

Forget the fairies and unicorns, most people return from fairy world with lost memories and mental problems. Olive Kennedy knows. She's the therapist who treats patients suffering from Faythander's side effects. Traveling back to the fairy realm wasn't on Olive's to-do list. But she has no choice. The fate of both Earth and Fairy depends on her ability to stop an ancient being called the Dreamthief. To complicate matters, she may be losing her heart to someone who can't love her in return. Saving the world, she can handle. Falling in love—not so much.

Olive's to-do list: Pay the rent, feed the cat, and save Faythander. Again.

When the fairy realm faces a new, terrifying threat from a goblin Spellweaver, Olive Kennedy leaves her home in Houston to travel through the most dangerous places in Faythander to confront him. Along the way, she learns that history is a muddled subject—especially when elves are involved. Her only comfort comes from Kull, her Viking warrior sidekick—who somehow negates her bad fortune. Yet, how long can their relationship last when his past is brought to light?

Short on cash, fairy world therapist Olive Kennedy resorts to finding clients at the Texas Renaissance Festival. When she discovers the corpse of her client's husband discarded in her booth, she realizes that earning her next paycheck is the least of her worries. Even worse, Olive learns the murderer may be a magical monster from the fairy realm. The fae and their escorts arrive from Faythander to aid in the investigation, but they do not travel alone. Olive must confront the one person she never wished to see again. Kull—her ex.
Available ebook formats: epub
Price: $0.99 USD
Buy Add to Library Give as a Gift
How gifting works
Create Widget
Tags: urban fantasy science fiction romance paranormal romance series for adults metaphysical and visionary fae romance fairy fantasy romance adult books mythology and folklore fairy tale
About Tamara Grantham

Tamara Grantham is the award-winning author of more than a dozen books and novellas, including the Olive Kennedy: Fairy World MD series and the Shine novellas. Dreamthief, the first book of her Fairy World MD series, won first place for fantasy in Indiefab's Book of the Year Awards, a Rone award for best New Adult Romance of 2016, and is a #1 bestseller on Amazon with over 200 five-star reviews. She has recently signed with Clean Teen Publishing for a fairytale retelling trilogy.

Tamara holds a bachelor's degree in English. She has been a featured speaker at numerous writing conferences and a panelist at Comic Con Wizard World speaking on the topic of female leads. For her first published project, she collaborated with New York-Times bestselling author, William Bernhardt, in writing the Shine series.

Born and raised in Texas, Tamara now lives with her husband and five children in Wichita, Kansas. She rarely has any free time, but when the stars align, and she gets a moment to relax, she enjoys reading, taking nature walks, and watching every Star Wars or Star Trek movie ever made.

About the Series: The Olive Kennedy Fantasy Romance Series

Olive's the half elf half human child of emotionless parents. She was lovingly raised by her adoptive father, the sky king dragon, and she still thinks of him as her parent.

Trained on earth as a psychiatrist she uses her fledgling magic and medical skills to help patients who've travelled to the magic kingdom of Faythander.

In these 3 books Olive falls in love with Kull, a Wult prince but this relationship seems doomed to failure. She learns of a terrible truth about the origins of a magical species and her destiny as the Deathbringer. Her skills are needed to save children from an evil dreamweaver and Faythander from the vengeance of a goblin and others.

With scenes ranging from the whimsical "fairy beds made of dandelion down" to the macabre "hearts ripped out of their chests" - this series is sure to entertain those who enjoy the fantasy genre.

You have subscribed to Smashwords Alerts new release notifications for Tamara Grantham.

You have been added to Tamara Grantham's favorite list.

You can also sign-up to receive email notifications whenever Tamara Grantham releases a new book.