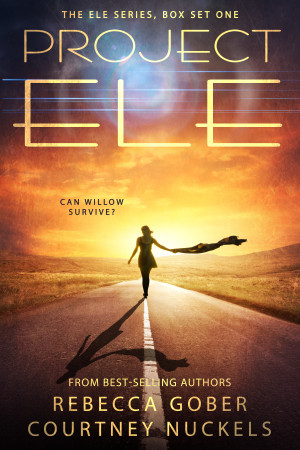 BOOK ONE
Project ELE (The ELE Series Book 1)
This set includes a newly revised edition of Project ELE with expanded scenes. When the government enacts Project ELE to preserve the human race after a devastating epidemic, survivors like Willow must adapt to new lives in shelters. But soon, Willow and her friends acquire unusual abilities that have far-reaching consequences.

BOOK TWO
Finding ELE (The ELE Series Book 2)
The forces of good and evil collide and Willow has no choice but to choose a side. When her rare abilities become a liability, an unlikely protector must step up to help her.

BOOK THREE
Exposing ELE (The ELE Series Book 3)
All thoughts of a safe haven go out the window when Willow’s parents and Tony are ruthlessly abducted. In an effort to save them, Willow has to take a stand against the darkness brought forth by the masterminds of Project ELE.

Rebecca Gober was born in Houston, Texas in 1982 and spent most of her life growing up in Dallas, Texas. In between working full time, being a wife and mother of two, Rebecca has never let her passion for reading and fiction fall through the cracks. Rebecca Gober's first book, Night Marchers, which she co-authored with her best friend and partner in crime, Courtney Nuckels, was released in e-book format in October of 2011. Since then Rebecca Gober and Courtney Nuckels have released the sequel to Night Marchers: Redemption as well as Project ELE, Finding ELE, Exposing ELE and Surviving ELE which are part of a new YA apocalyptic series that has a paranormal twist.

You have subscribed to Smashwords Alerts new release notifications for Rebecca Gober.

You have been added to Rebecca Gober's favorite list.

You can also sign-up to receive email notifications whenever Rebecca Gober releases a new book.