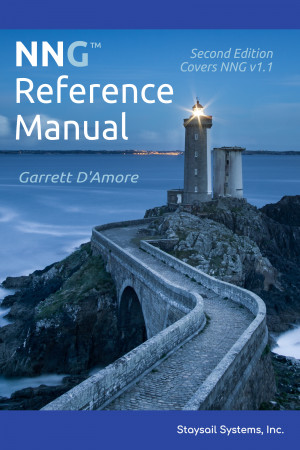 NNG is the newest member of the nanomsg suite of protocols. Implemented as a single library in the C programming language, this framework provides performant, scalable, secure, and reliable interoperability for distributed applications. The API documented here can be used to create concurrent distributed applications around common network communications patterns such as publish/subscribe, request/reply, or survey/respond. This ebook format is fully cross linked for use as a desk reference.

Garrett has over 2 decades of experience building technologies for networking, systems, and storage, and leading technical teams to success.

He is most widely known as the founder of illumos, and the maintainer of nanomsg, but has developed software used in FreeBSD, NetBSD, Solaris, ZFS and others. More recent projects include NNG (nanomsg-next-generation), mangos (nanomsg in pure Golang), tcell, and govisor.

He was also known for his work at Sun on the PSARC committee, which was responsible for the technical direction of Solaris.

You have subscribed to alerts for Garrett D&#039;Amore.

You have been added to Garrett D&#039;Amore's favorite list.

You can also sign-up to receive email notifications whenever Garrett D&#039;Amore releases a new book.