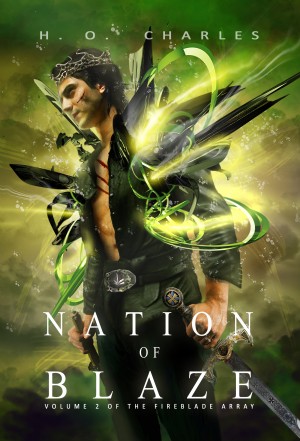 Nation of Blaze (Volume 2 of The Fireblade Array)

H.O. Charles is author of The Fireblade Array - a #2 best-selling series across Kindle, iBooks and B&N Nook in the Sci-Fi and Fantasy categories (#1 would just be showing off, right?)

Though born in Northern England, Charles now resides in a white house in Sussex and sounds like a southerner.

Charles has spent many years at various academic institutions, and cut short writing a PhD in favour of writing about swords and sorcery instead.

Hobbies include being in the sea, being by the sea and eating things that come out of the sea. Walks with a very naughty rough collie puppy also take up much of Charles' time.

Also in Series: The Fireblade Array

Reviews of Nation of Blaze (Volume 2 of The Fireblade Array) by H. O. Charles

You have subscribed to alerts for H. O. Charles.

You have been added to H. O. Charles's favorite list.

You can also sign-up to receive email notifications whenever H. O. Charles releases a new book.