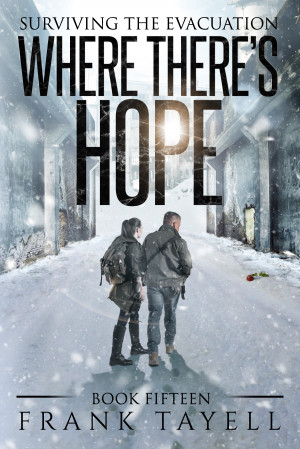 By Frank Tayell
Northern France is a frozen morass of mud and snow across which rampages a horde of the undead, a hundred million strong. Britain has been abandoned, Belfast is a ruin. Radiation is seeping into the Irish Sea. That won’t stop Chester Carson. He's on a quest to save his family, his friends, and humanity itself. More
There is always hope.

Northern France is a frozen morass of mud and snow across which rampages a horde of the undead, a hundred million strong. That won’t stop Chester Carson and his comrades. Seeking a way across the Channel, they make for the coast, unaware that Britain has been abandoned, Belfast is a ruin, and that radiation is seeping into the Irish Sea. If they knew, that wouldn’t stop them either. They’re on a quest to save their family, their friends, and humanity itself; failure is not an option.
As they journey through war-ravaged ports and storm-wrecked beaches, a new truth becomes clear. The flotilla that found refuge on Anglesey wasn’t the only group of sea-borne refugees to have survived the outbreak. There are other survivors. Some good, some evil, some just determined to do their duty no matter the cost.

Danger lurks along the French and Belgian coasts. So do answers, and hope that humanity now has a future.