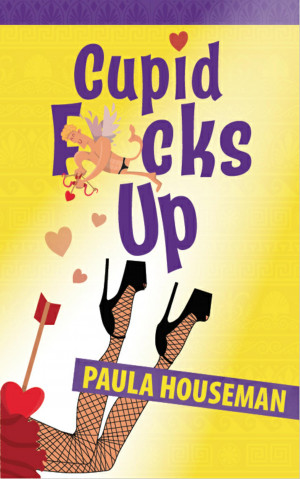 Women's magazine columnist Ruth Roth’s first time with her man leaves her gasping. It has nothing to do with his prowess or the taboo-ness of the romance. And it’s not like she’s inexperienced (divorced and in her mid-forties, she has two teenage children). It’s her mother’s unexpected and unwelcome presence in the bedroom that has Ruth all bent out of shape! More
Ruth Roth is a straight shooter. Pity Cupid’s not.
Smart-mouth Ruth is an inspirational humour columnist for a popular women’s magazine. Recently divorced, she has found the love of her life. Without any help, mind you, from the little fat love god. Ruth has decided she herself is her one and only.
And she’s in a comfy place. Why wouldn’t she be? No need to yell, ‘Put the bloody toilet seat down!’ No need to hear, 'Pull my finger'. No need to hoover toe-nail clippings off the carpet.
But then a silver-tongued Prince Charming fronts up in his shiny Merc and tickles her discarded, little-girl fantasies. He tells her their love is written in the stars.
It must be a misprint!
A romance with this particular PC is not so PC. Still …
Ruth’s life plays out more like ancient myth than fairy tale. And what hot-blooded woman can resist forbidden fruit?
There's a problem, though. Ruth does not have a hot-blooded mum. Ruth has a pain-in-the-arse mum whose squawking disapproval cranks the taboo up a notch.
So then, all the more reason to take up with the stud! But it means taking on the harpy.
Tensions mount, and even Ruth’s man can’t protect her from the trash-talking voices in her head. It looks like he can’t muzzle his own either. When an earth-shattering revelation causes him to give her grief, it makes her feel like she’s dating her mother.
Taking the kind of advice she doles out to her readers is not so easy, and Ruth wonders if this love can survive. More to the point, is it worth the trouble?
Available ebook formats: epub
Price: $2.99 USD
Buy Add to Library Give as a Gift
How gifting works
Create Widget
Tags: contemporary literary fiction jewish fiction fiction womens fiction love romance comedy romance sexy satire humour humour fiction
About Paula Houseman

I grew up in an episode of South Park on an endless loop.

Or so it seemed.

What felt like hard yakka at the time is now a fabulous cache of raw twaddle to draw on.

When I first realised that my early, quasi-fictional home environment had distorted my understanding of selfhood, I became curious about the concept of identity. As a graphic designer, I’d already been creating business ones for others through imagery.

But scratching the surface wasn’t enough for someone who asked a lot of questions. So, I went to university and, majoring in linguistics and sociology, I learned about the power of word usage to shape our identities and realities.

Still not enough, though.

I dug deep into the substratum until it felt like I was schlepping through a filthy ancient myth. Or an episode of South Park. It was like a homecoming.

Not a bad thing because I uncovered my muse, the butt-ugly, goddess of obscenity.

She, who embodies a holy kind of dirty, shows me the absurdity of the human condition, reminds me about the value of laughter, and is responsible for my dirty bazoo and the bawdiness in my books. My three Amazon #1 bestsellers (British satire and humour category) are part of the Ruth Roth series, but all are standalones. Book 1, a Readers’ Favorite Award winner, is the coming-of-age chick lit, Odyssey in a Teacup; Book 2, 2019 New Apple eBook Awards Humor Official Selection, is the romantic comedy Cupid F*cks Up (formerly known as Apoca[hot]lips); and Book 3, My Troyboy is a Twat, is also a romantic comedy. Book 4 is just around the corner.

About the Series: Ruth Roth

What’s in a name? Plenty when your brother gets several, but you’re only worth one syllable, no middle.
The first time Ruth Roth felt important was at age five. A classmate nicknamed her Rath-Reth-Rith-Roth-Ruth after they’d learned their vowels. A year later when he dumped a catty moniker on her during Book Week, she bitch-slapped him and made his nose bleed.
Having girl-balls in the era of the engineered lookin’-good family is hard yakka. And mouthy Ruth’s life choices are a series of look-who-did-it-and-ran. But worn to the bone, she marries her mum’s idea of a prince. No woman deserves a snoring-boring existence, though, and life isn’t a fairy tale. It’s an ancient myth in modern dress. So, when in Rome …
The Ruth Roth series is about the power of female friendship; the challenge of mothering bolshie children (little mirrors); saying no to reel love with Mr Right and yes to real love with Mr Wrong; selling your soul and reclaiming it.
It’s for women who want to shuck off the historical shame and recover their mojo in a mofo shallow culture.

You have subscribed to alerts for Paula Houseman.

You have been added to Paula Houseman's favorite list.

You can also sign-up to receive email notifications whenever Paula Houseman releases a new book.